Review: Louder Than a Bomb

If high schools put the same insane competitive energy they put into basketball and football into … well, let’s say poetry, what would it look like?

You’d have tryouts to even get on the team. There would be determined coaches, individual drills and after-school practices. You’d have competitions, finals and then a play-off with cheering, stomping, screaming fans.

And that’s what happened.

Kind of like a slam dunk, the Slam poetry movement, gathering steam in the 1990s, has propelled itself into a successful movement that gives students a public opportunity for expressive passion.

Slam poetry is all about telling your own story with raw honesty and emotion. It is telling the truth.

There is even a playoff. Begun in 2001, the largest youth slam contest in the world is the Louder Than a Bomb poetry competition in the Chicago area. This year, it is predicted that over 750 students from 100 schools will compete in front of an audience of over 5,000.

we are the children of empathy,
the pathos of slums, we heal like helios
like cyclical drums
we enlist life from listless
and sometimes
even get things done
(this and prior excerpts from “Poet Breathe Now” by Adam Gottlieb)

Adam Gottlieb is one of four students followed in the 2008 Louder Than a Bomb tournament. These students allow us into their conflicted lives of abandonment, neglect, hope and ambition.

Lamar Jorden, one of these students, begins the film saying, “I was a bit of a troublemaker, and I did some things I regret. I would like damage a lot of things in my house, but my father never cried about that. When I got arrested, my father didn’t cry about that. First time I made my father cry, was the first time he heard me perform poetry.”

Poetry for these kids is a way to be heard and self-actualized.

Lamar leads the students from Steinmetz, a hard core school in a neighborhood of drive-by shootings. They entered the 2007 competition with a team of 50 and came away champions. Perhaps their biggest competition in 2008 is represented by Adam Gottlieb from Northside College Prep High School, a rigorous nationally-ranked academic institution.

In 2008, the Steinmetz team hasn’t prepared well. At the last the minute, the coach tells them to change their final poem. So they put it all on the line with a startling poem called “Counting Graves,” reflecting their frustrating life in the Steinmetz neighborhood.

Counting Graves by The 2008 Steinmetz Team

In Slam tournaments, students are scored 1-10 as if they were in the Olympics. However, the judges are taken from the audience and the points are added up only for the team, not the individual.

but still I thank this forum for help making me so strong
for letting me talk about
sex, drugs, basketball, and moms
fond farewell to this chapter and to all the joy and laughter
this for every kid, whose voice has been
louder than a bomb
(excerpt from “Look!” by Nate Marshall in the 2008 LTAB competition)

“Louder Than a Bomb” is an inspiring film about writing, thinking and the courage of expression. Playing at the Northwest Film Center on April 29, Lamar Jorden, one of the stars of the film, will lead a question/answer session directly after the presentation. 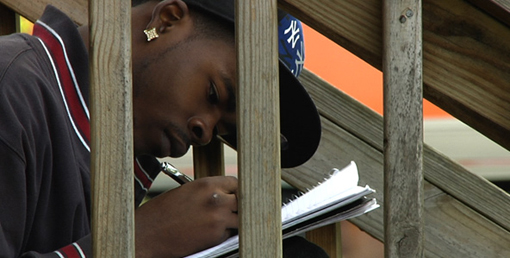