The stories those cans could tell. Everybody has a story and this microcosm runs the gamut. Employees are interviewed in their workplace as they live the better part of their lives with their assigned companions. Some flirt, some have serious conversations, some work alone and enjoy it. Some work alone and fight off insanity.

There is something notably ordinary about the setting of the supermarket. Maybe this is what makes the deeply personal revelations of the workers start out in such stark contrast. As it turns out, there are actual lives amongst those vegetables and canned goods. The baker goes about his work with a quiet determination. He is good enough that he can ponder his life outside of his occupation while judging his products to a micrometer of perfection. There is a sense that he comfortable in his own skin while wondering if he is missing something outside work, and how much his friendships at work make up for a solitary lifestyle.

Director Tali Yankelevich felt that he had to make a film about this workplace after hearing two employees talking in a deserted big box market late at night. While he was grabbing a few things to get him through the day, the aisles were alive with emotion, activity, and dreams. The repetitive nature of stocking shelves, cutting and placing meat, making baked goods and deli foods formed a sort of symphony.

The least likely setting for a ballet turned out to be his inspiration. Few of the shots are completely up close head shots. Most show the activity surrounding the subject, somehow contrasting the unique emotion of the speaker with the non-unique nature of selling retail. None of the shots are outside of the store and none show anything outside the store. The switch from active sales areas to the cavernous warehouse is all the viewer gets. Mostly, we see what the workers see, the same thing every day.

The woman working the security cameras is especially vivid. She watches for suspicious activity, trying to limit shoplifting. There is another voice at the other end her radio and that person we never see. In fact, we hardly see any of the people she is describing. They form a surreal moving maze that we are not sure we, or she, understands.

The flirtatious activity at the deli counter seems headed to ensure a future generation that may or may not be satisfied with these work routines. This could be the start of something big, better or worse is impossible to say.

The camera moves to the check out stands and records the innermost thoughts of that worker. He is doing okay, he reports, the anxiety attacks are under control. Maybe they will go away, or things will change for him.

A lovely soundtrack of percussion, piano, horns and percussion make a suitable background for the repetition as well as the promise of better things to come. As John Lennon said, “Life is what happens while you’re busy making other plans.” 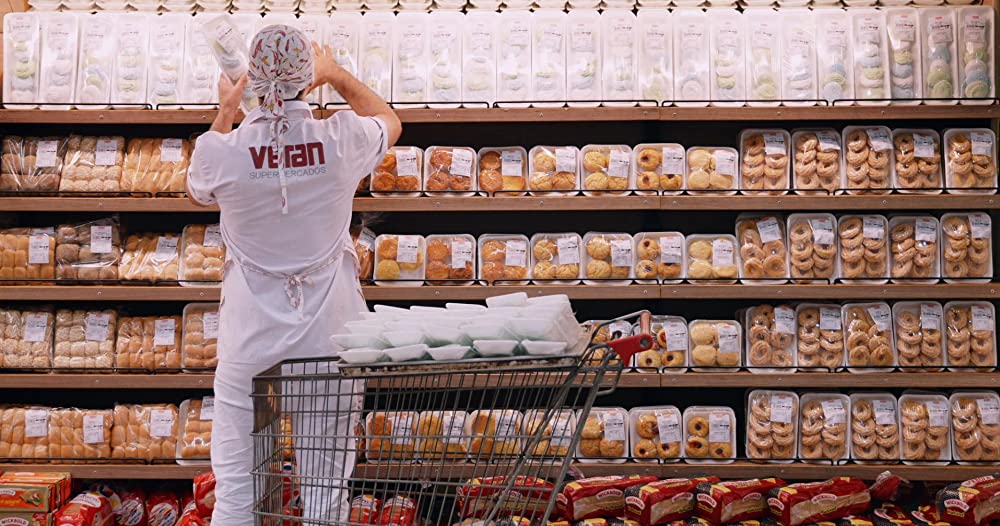