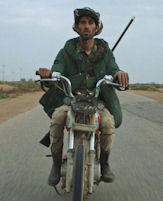 In the battlefields of the Middle East, the background of war has permeated too many hours of everyday life. Civilians suffer the consequences of greed, avarice and doomed religious utopias and then are constantly reminded of those traumas by geographical institutions beyond their control. Off-gassing flares from oil fields are huge torches, twenty yards huge and a hundred yards high. They can be seen for a dozen, maybe a hundred, miles away. The torch bearers are the colonists of the past who have passed their legacy of entitled greed on to present dictators.

The chatter of machine gun fire is unmistakable. Covered up temporarily by rain, storms and the rushing water of flooding, it comes back without notice or reason. A long burst, two short bursts. What they have accomplished is beyond logic, their intent inscrutable. Their memories are the next chapters in the long, dull anguish that is life in the war zone.

Water flows through Gianfranco Rosi’s brilliant documentary like oils flows from the soil. War is not what we think and the desert is not what we think. Shot along the borders between Syria, Iraq, Kurdistan, and Lebanon, misery flows like water beneath destroyed bridges, over bombed roads and past isolated robotic pumpjacks. The land is being made untenable for everything except the iron donkeys that work the oil from the rock even after their human sires are gone.

A storm of climate change floods a river crammed with makeshift ferries transporting a fraction of the lorries that used to cross the huge wreck of a bridge next door. There is no accompanying dialog or soundtrack, just the images of depressed chaos at the current site of failed civilization. Climate change on all fronts here. Every car in New York, London and Paris runs with ghosts in its gas tank. Who died for that gallon of gas?

People have the traumatized thousand mile stare from birth. It is better not to see. Classroom studies are focused on concentrated hard work reliving scenes of unfathomable horror to allow children half a chance to move on to, if not a normal life, at least a life of controllable anguish. A hunter roams fields shooting the few remaining birds for sustenance. The birds being smaller than a fist it is hard to believe they are worth more than the shotgun shells it takes to kill them.

Women play a major role as both mothers and fighters, backed by the powerfully stark pallet of the torture chambers of ancient prisons, now abandoned ruins. There is no soundtrack, only the silence of death in the wake of the last artillery shell, the last machine gun burst or the last oil derrick nodding senselessly to the stupidity of war. There is only so much one can say about man’s inhumanity to man and this film says it all. 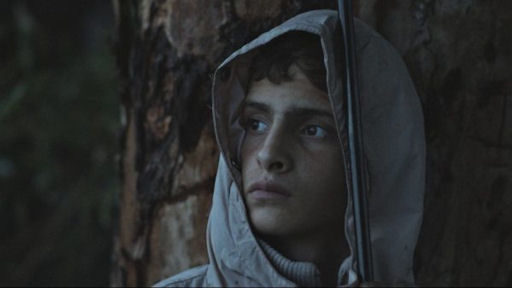