Review: On The Map

When depressed in a dark hole with enemies lurking on all sides, what’s the best antidote? Distraction.

Though she had been repeatedly attacked and even though her very existence was entangled in the frozen core of the Cold War conflict, Israel’s people were still hanging on. But times were grim and their fears for survival pervasive. So it was when the US National Basketball Team came to Tel Aviv for the 1965 Maccabiah Games, Moshe Dyan, soon-to-be Israel’s Minister of Defense, forged ahead with a new hope. With the right players perhaps the Maccabi Tel Aviv basketball team could become competitive. Perhaps it could triumph on the European athletic stage, and in that way gain the dignity and respect of a world force. Perhaps a winning team could also distract a country from the rubble of random attacks.

The player of hope was Tal Brody, an American Jewish basketball star who led his US team to a gold medal victory at the Maccabiah Games. He had become an American All-Star while at the University of Illinois and was drafted 12th in the NBA. But after the game in Tel Aviv the Israeli Maccabi team and Moshe Dyan encouraged him to switch his allegiance. Come to Israel. Join the Maccabi Team.

This fast-paced documentary, with legendary Bill Walton narrating, is about a team that mirrors the persevering Israeli spirit. It is also a film about a man who gives up his country and the fame, glory and riches of an NBA affiliation, for heritage. Because of Brody other American basketball players like Aulcie Perry, Eric Minkin, Bob Griffin, Lou Silver and Jim Boatwright come to Israel. Their goal is to triumph at the European League Championship and challenge includes a game against the forbidding Red Army Russian team. The first hurdle is that Russia is boycotting Israel and forbids Israelis on their soil. A compromise is achieved and the David and Goliath confrontation is held in neutral Belgium.

The Maccabi Tel Aviv team became a unifying agent of Israel. Everyone watched all the games and government leaders, including Moshe Dyan, regularly came to the games in person. The documentary is full of impossible 3-pointers, surprise assists and super-human passing.

How the newly American-dominated Israeli team affects the Israeli basketball club and the European League back in the 1970s is the thrill of this excellent, fast-passed documentary. Parallel to the national story are Brody’s tough choices involving his invitation to play for the NBA, his draft into the Vietnam War, marriage to an Israeli, mandatory military service for Israel and a medical crisis for his father back in the US.

Dani Mankin, the filmmaker and a prior two-time Israeli Academy Award winner, has collaborated with an exceptional production team, including Steven Speilberg’s sister, Nancy, to show how sports can cross all divides to unite a country in pride and how one man can make a difference. As Tal Brody presciently calls out in 1977, “We are on the map! And we are staying on the map – not only in sports, but in everything.” 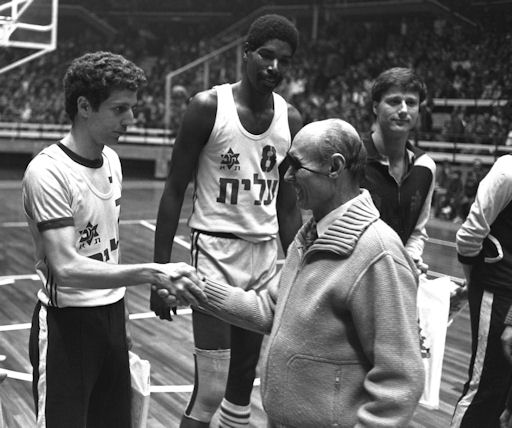