Directors Nate Adams and Adam Carolla roll out the big guns for this gear head documentary about the toughest and highest stakes feud in auto racing history. 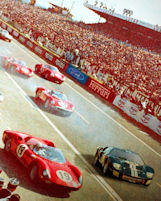 The battlefield was Le Mans, a 24-hour race of speed, handling and endurance that has become legend. For those of you who do not know, or do not remember, Le Mans is the one where the drivers run across the track to their cars, jump in and roar off to the start. This starting method, laughable by today’s safety standards, was sure to start the race off with as much mayhem as possible. Spectators were assured that more was to follow.

Enzo Ferrari had built what were arguably the finest cars in the world from about WWII forward. He used the awesome technological advances in, especially, aircraft engines, to build the legendary V12. Grand Prix races had thrilled spectators since the turn of the century. By 1950 the power and speed of the cars had outgrown the traditional format of racing through existing city/town/suburb streets. The tortuous turns, long straights and varying banking was moved to organized race tracks, although they were sadly lacking in safety features. Cars would explode, break apart and rocket off the track, killing spectators and drivers alike. Racing events were alive with blood lust.

In the late 1950s, Henry Ford II decided racing was a valuable advertising campaign and that Detroit Iron should get into the act. He did the obvious corporate thing and tried to buy Ferrari. When that failed, he did what he should have done to begin with, which was to command his troops to build the fastest cars in the world. Money was no object, he crushed Enzo with US bucks.

The film charts this transition with archival footage of riveting early races and first hand interviews relating that racing was not always a priority among US car builders. In fact, it was dangerous and killed people. James Dean killed himself in 1955 in his Porsche Super Speedster and Porsche was driven into hiding. This was not the message Chevrolet was saying in “See the USA in Your Chevrolet.” That family of husband, wife and two cherry cheeked kids was not off to kill themselves in mountain S curves. Safe driving was what would sell cars, not racing.

Even so, Chev built the Corvette (at first, in secret) and Ford quietly developed the GT40, powered by an early version of the Mustang engine. The race was on, the V8 versus the V12.

Although this film is saturated with the most exciting race events since Roman chariots it is sadly devoid of real gear head material. There is zero commentary on how Ferrari settled on the V12 engine configuration and why he stubbornly stuck to the 275-cubic inch (CI) displacement, even after Ford saw the light and blithely upped the displacement to 427 CI to walk away with Le Mans in 1968. Perhaps there was a gentleman’s agreement about displacement, but Ford was no gentleman when it came to winning. International rules would outlaw the larger engine in two years, but it was too late. Ferrari never won another Le Mons.

Someone should duplicate this movie and replace all the shots of Ford and his wife with technical narrative of how engines, transmissions, suspension and body shapes evolved to win. With all the details about valves, cams, materials, sizes, shapes and formulas. Having said that, it’s a great movie and must see for racing enthusiasts.