Most mystery thrillers begin with a little mystery and build up the tension until the end when all is explained, to the amazement of the audience. In Isabelle Huppert’s films, the story starts with a little mystery and ends with an even bigger mystery at the end. Paul Verhoeven’s “Elle” is no exception. The movie starts with a violent rape and the chase is on to identify and expose the rapist. In it is not all that clear who is the assailant. 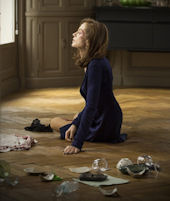 What we know is that Michele Leblanc has founded and manages a smashingly successful computer game firm with her partner and longtime friend Anna (Anne Consigny). Rich, stylist and overtly sexual, she runs the firm with an iron fist, dictating schedules, duties, priorities and deadlines to her staff of whiz kids. After Michele’s rape, the alpha male upstart in the firm is suspected. But then, when Michelle asks Anna who would hate her enough to do such a thing, Anna replies, “Just about everybody.”

Then comes the lunch at the peaceful café when the frumpy matron walks by, dumps her lunch leftovers all over the spectacularly dressed Michele and cites her and her evil father. Visiting her mother, Michelle finds her with yet another young man, one of the many her mother buys, enjoys and discards. Michelle’s son Vincent (Jonas Bloquet) comes to visit, and with pride shows his mother a picture of his pregnant girlfriend who later delivers a child that more closely resembles Vincent’s black best friend.

A man parks outside her apartment and stares at her window while smoking cigarettes. Michelle pepper sprays him only to find it is her ex-husband Richard (Charles Berling), who is concerned for her safety. Michelle develops an intense voyeuristic infatuation with Patrick (Laurent Lafitte) the guy next door who is married to the devoutly religious Rebecca, and masturbates while she spies on him through binoculars.

Then things start getting strange.

Amazingly enough, there is a sort of pretzel logic to all of this, but the average viewer probably will not understand a single thing until at least an hour after the film ends and their head stops buzzing. Some say this is Huppert’s finest performance, and it may well be. For those who love her, the demented psychological backdrop and the rapid-fire insults, denunciations and sado-masochistic antics only serve to set the stage for her to shine. There is a temptation to try to connect the casual bestiality of her firm’s electronic games with Michele’s loathsome existence. In the end, it is not that at all. If anything it is the games that are influenced by Michelle’s life, not the other way around.

“Elle” competed for the Palme d’Or at Cannes and is the French entry for the Best Foreign Language film at the 2016 Academy Awards. Huppert has won the New York Film Critics Circle Award for Best Actress and the Gotham Independent Film Award for Best Actress. The crisp dialog and direction and the great work by all the supporting players make this a better all-around film than many of Huppert’s previous. Still, the best reason to see this one is to see her, pretzel logic and all. 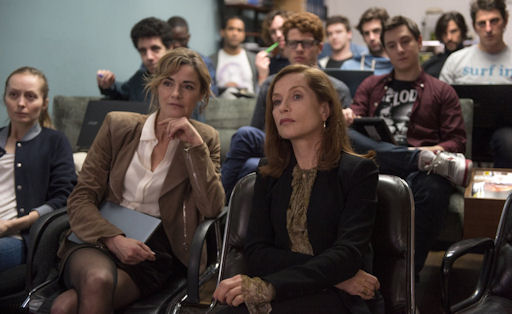