If an animal is up a tree, down a sewer pipe, over a cliff, or stuck in ocean quicksand, who do you call? In LA, it is SMART, the Specialized Mobile Animal Rescue Team for Los Angeles Animal Services. 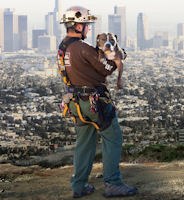 I told myself, “Don’t watch it!” — sure this documentary would break me both emotionally and financially. Saving helpless, scared furry animals pulls heartstrings. I thought tragedies would occur, then crying, and then donating. But none of those reactions are possible because SMART has a 100 percent save record and is a city-funded program that is not asking for money.

Just one reason to see this well-produced film is to see how a collaboration of government departments can cross-train and work together effectively. A second reason it that this is a Superman story of how a relatively normal guy like Armando Navarrete, at any time of the day or night, will reach out to save an animal – wild or pet. Third, it inspires us about what is best in our character – our ability to empathize and mobilize for what we believe in.

SMART was created through a collaboration of LA city services. A unification of small and large animal rescue operations collaborated with the Department of Air Rescue and the Wildlife Program and Permit Section. In the beginning, Navarrete was given $1,000 for equipment to outfit his crew of 17. With the combination of departments, now he has all he needs, including life flights, rappelling equipment and access to vet services.

Armando Navarrete, the principle catalyst and developer for SMART, sees the program as a template for replication throughout the US. However, in describing the development of SMART, Navarrete describes himself as reckless, learning from an early age by doing – including testing out his home electricity system from the socket. Luckily his kinetic self-teaching has worked out.

Navarrete thrills at hands-on problem-solving, whether figuring out how to get the cat out of a tree 65 feet up or how to lift a lovely white horse out of ocean quicksand. He says his biggest reward for his often life-threatening work is returning the saved animals who are pets back to their owners. But I think another rewarding consequence will be training others in the equipment and strategies he has devised to make SMART such a successful program with over 1,000 animals saved.

Annette Ramirez, Armando’s team-mate and partner, is a self-confident woman who prides herself on safety and logical thinking. Armando finds her the perfect complement to his spontaneous energy. After working all day and then getting a call at night, he knows Annette is the one he can count on every time to drop everything to join him.

“SMART” has so far been nominated for at least nine awards and won five of them at independent film festivals in 2016. Acclaimed Portland (Oregon) based filmmaker Justin Zimmerman, and his editor, cinematographer and collaborator at Bricker-Down Productions, Tory Maurer, have teamed on the production of an inspiring film with truly clever engineering feats in cinematography. 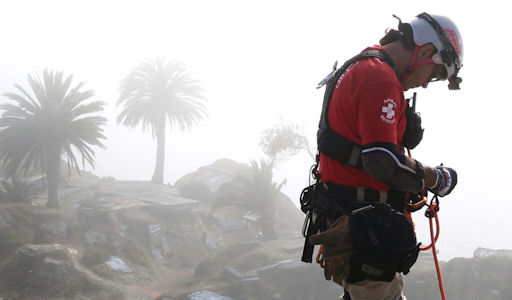 “SMART” came out on DVD and On Demand on Dec. 6 and is also available on Amazon Prime.