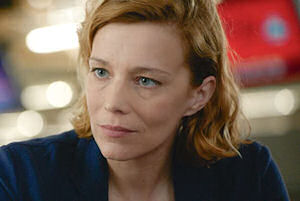 Something nasty is afoot at the alumina plant. One of the few chemicals not yet squarely implicated in outright poisonings of local populations, aluminum and its chemical progeny have their dark side. As alumina is freed from Bauxite ore a red sludge is left behind that threatens to become the star of this film. The screenplay puts techno-geek issues in their place and switches back to familial loyalties within immigrant populations. In the end the technical details are fuzzy and the issues of race, class and corporate ethics come into sharp focus.

UniFrance and Film at Lincoln Center’s 26th edition of Rendez-Vous with French Cinema runs March 4 to 14 in the FLC Virtual Cinema. Zita Hanrot (2016 Cesar winner in “Fatima”) stars in this Cannes 2020 selection, sparkling with the help of superb supporting work from Sami Bouajila (Cesar-winner for Andre Techine’s “The Witnesses”) as her work-stressed father Slimane. Like the similarly powerful class critique “Ibrahim” in this year’s Rendezvous it projects environmental activism in an unforgiving glare of corporate bullying, especially vicious when levelled at vulnerable foreign born citizens.

Continuing in the tradition of “Silkwood” and “Norma Rae” the screenplay blasts both barrels at material extraction and smelting. It chooses these impacts over the possibly greater impacts of the energy consumption required by aluminum refining. If dampening the message to sympathetic techno-geeks, it has the advantage of jarring photography as the secret fence is cut and the camera opens up to a huge arial shot of a blood red wasteland that used to be habitat.

It is hard to photograph mammoth electricity use and carbon dioxide and the dead wetlands tells the story in spades.

It would have been a better movie without the crusading investigative reporter Emma (Celine Sallette). Not a criticism of Sallette as her acting is first rate, it is the character that draws the plot into too familiar territory. Better might have been for the plucky Nour to have figured out a clever way to out the double-talking executives directly without ratting to the press. As it is, this is a movie about freedom of speech as much as personal courage. Fair enough, but that has been said many times before.

The titular red soil is everywhere, even in the middle of occupied places where it would never be. At one point it is even radioactive, morphing from toxic chemical to nuclear waste. Thank goodness we did not veer into “China Syndrome.”

The final scenes of Nour sneaking a critical sample from the sewer line would never pass geek vetting. Sometimes she is too naive and clumsy to be believed. Even so, Hanrot and Bouajila carry the day as Nour gives her all to make tough decisions about jobs, safety and the long term health of the planet’s human population. A stripped down soundtrack and fantastic access to actual work sites recovers much needed realism for the movie.

The vulnerability of the working class, and especially the immigrant working class, lends power to writer/director Farid Bentoumi’s screenplay about average people standing up to corporate might. Unfortunately, it also dilutes the environmental message of the movie as the viewer takes in that message and the race-class message as well.