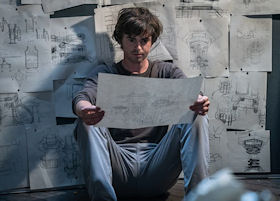 Walter and James had a right to be mad. After risking their lives recovering a priceless treasure stolen fair and square by Sir Francis Drake, Spain steals the treasure, fair and square, right back. There is no justice for gutsy cowboy tomb raiders these days. Get mad or get even, Walter and his plucky gang of thieves choose the latter. All they need is a genius. Steve Jobs would do. No, he is dead. Bill Gates? No, he is busy curing Covid. Elon Musk? Better to starve. Then who….?

Thank goodness genius engineer Thom (Freddie Highmore) is available. That 100 year old uncrackable vault in the Bank of Spain is not going to open itself. There is a weight sensing mechanism that is calibrated to a fraction of a kilogram and helpfully labelled “over” and “under” for the non-engineers in the audience. Any variation and the entire basement is flooded with an underground river and any thieves are drowned like rats. In fact, anybody in the basement is drowned as well, rats or not. Remember the Spanish Inquisition? Just think about it.

In his job interview, Thom hacks the entire security system of the bank in about a minute and forty seconds. This kid is really smart. Plus Lorraine (Astrid Bergès-Frisbey) is there to crack any safe known to man. It’s lucky she is good with safes because it is not obvious she can act. Director Jaume Balaguero showed Liam Cunningham Sean Connery’s performance in “The Great Train Robbery” and that was all the direction required there.

Sam Riley plays James the tough scuba pro who turns into the double crossing punk right on schedule. Only the group’s inimitable magic stands between them and the bad side of an updated Inquisition. British MI6 is involved, since England hired Drake to steal the treasure from the Spanish who stole it from the indigenous Americans. Yes, MI6 has better things to do but Famke Janssen had to do something in the movie. We seldom see a sultry secret agent as wonderful as she.

While essentially a replay of myriad heist flicks, without Sean Connery or the equivalent charismatic lead, the team of five screenwriters foisted a nice twist by staging the break-in at the same time as the World Cup football semi-finals. Madrid is vying for another exciting win and the center of their celebration is happening in the Plaza de Cibeles just in front of the Bank of Spain. Cuts from sweaty wire cutting and lock picking to even sweatier soccer celebrants add the needed excitement to take this movie to the finish.

Jose Coronado plays Gustavo the scowling security chief at the bank who seems to know beforehand that he is going to get upstaged by young engineering genius Thom. Gustavo probably cheated on his bank vault exams. His character could have used about three times the fearsomeness and Famke Janssen could have used three times the screen time. At death’s door, Sam Riley swims for it and saves the day, flogging memories of Shelley Winters in “The Poseidon Adventure.” Sadly, that memory does not do this film any good. She did it backwards and in high heels.