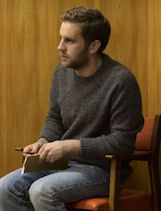 Beginning with a mock convention involving stand-ins for mayor and other local pols, “Run This Town” has an underlying satirical spirit. The intellectual acumen and clever arguments in the mock city hall hearings are entertaining. At random intervals, a washer or dryer spins, perhaps poking fun at the political spins required at the Toronto mayoral office.

Soon, the young adult participants are involved in parallel real-life roles. “Run This Town” is a docu-drama on the last days (2013) turbulent Toronto Mayor Rob Ford (Damian Lewis) was in office. Surrounded by intelligent young staffers who cover for his ineptness, cruelty, and addictions, it is they who truly run the mayoral office.

But the cover for Ford’s erratic, unacceptable behavior and judgment begins to run out. A shy, inexperienced but ambitious new reporter, Bram (Ben Platt) of the city paper has got a lead on the mayor’s addiction to crack cocaine. It’s Bram’s story that drives the film.

At one point, Bram is in a clandestine meeting in a dark, underground garage. We aren’t sure how safe he is. Obviously forgetting to turn off his cell phone, it suddenly rings, giving away his secret location in the awkward, dark silence. It’s his mother who is just checking in.

It’s continual moments like this, a seriously suspenseful, grave moment juxtaposed to ordinary reality, that add a pinch of satire to this true recount of the Toronto mayor and his mischief.

The acting by this young cast is great. The mayor, in prosthetics, is a sinister character out of control. As he gets too close to a female assistant, we fear no one will stop him.

Both alcoholism and drug addiction poisoned Mayor Rob Ford’s life. His notoriously malevolent and physically abusive behavior marked not only him but his entire staff because they not only covered up what was happening, they also created spins to mislead the public.

Though the cast is extraordinarily talented and committed, the overall look of this film made in Canada is home-made. Also, sometimes we also can’t decipher the fast-clipped dialogue. However, despite this amateur feel, “Run This Town” is an excellent character study of a fallen leader and his minions with their own ambitious agendas. “Run This Town” opened in U.S. theaters through Oscilloscope on March 6, 2020, and can be seen On Demand and Digital through Quiver Distribution. 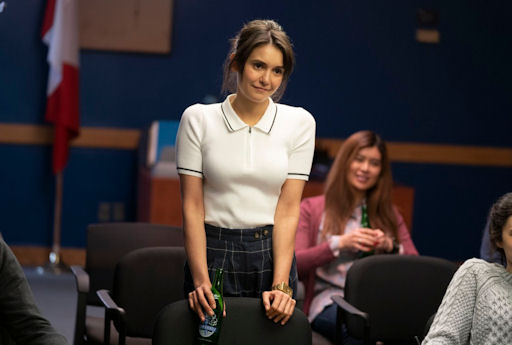