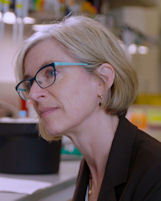 The magic was here all along, and now, more than ever, it is ready to be used to eradicate congenital disorders, save coral reefs and possibly even help adaptation to climate change. It’s called CRISPR and it enables genetic engineering. Already it’s close to preventing sickle-cell anemia and closing in on diseases like Parkinson’s.

Dan Rather, the famous newscaster who famously lost his job for an investigation into Bush II’s military service records, has executive-produced this excellent documentary on what may put humans on a trajectory towards remarkable evolution. Organized into chapters, the film covers genetic patterns and how a naturally occurring genetic “slicer” can modify codes so that many congenital disorders can be eradicated before birth.

The “slicer” is a naturally occurring chef within the human DNA. Known for about 5 years now as clustered regularly interspaced short palindromic repeats, its nick-name, sounding like a kitchen gadget, is CRISPR.

Jill Banfield, professor at the University of California at Berkeley, explains that through the study and experimental application of CRISPR, there will come “the time when man will have the power to alter his very genes.”

Is this a deliverance or potential disaster?

The problem is that while most congenital diseases might have the potential for eradication using CRISPR, other things, like identifying the genes for eye color, hair color, muscle mass, and even courage have the potential to create designer babies and super humans.

Soviet President Vladimir Putin directed $2 billion in 2018 for genetic research that he says will “determine the future of the whole world.”

In an interview for the 2019 SXSW (South by Southwest) Film Festival, Adam Bolt, the award-winning director of “Human Nature,” excitedly reported that “we now have the ability to manipulate DNA, something that is 40,000 times smaller than a human hair.”

Bolt also explains that “CRISPR and gene editing have tremendous potential for good. But I think we have to be continuously grappling with how technology is affecting society. And that’s what I love about film—it brings people together in a dark room to have a shared experience, and then when the lights come up we can start talking about it with each other.”

Throughout this exceptionally well-explained doc on science, runs the story of charismatic Sam Sanchez, a high school student who is part of an experimental study at Stanford Children’s Hospital. He has sickle-cell disease, an inherited disorder caused by just one genetic mutation. Sam is a thoughtful young guy, and Bolt leads us to care about him as we care about the encompassing potential of CRISPR.

This is high-caliber documentary-making at its best. “Human Nature” is shocking, surprising, hopeful and thought-provoking. Now available On Demand and Digital, “Human Nature” is a nod to the magic of science and the men and women who figure it all out.