“Shazam!” released to a largely positive critical reception. The character-concentrated film focuses squarely on a teenager’s response to being a superhero. 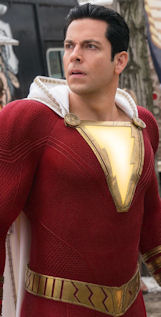 Remember being young, innocent and running around your garden with a towel draped over your shoulders, convinced that you were soaring over cityscapes? Remember how you imagined all the good you would do with your powers? How you would save innocent lives, bask in the glow of praise, and make the world a better place?

Alternatively, remember when you were young, innocent and imagining being an adult? Remember how you envisioned being old enough to log on at any online betting site you wanted, and put down a bet, without fear of being busted?

“Shazam!” remembers, on both accounts, and happens to be an entire film based around these concepts.

I’m a Superhero!
“Shazam!” tells the story of Billy Batson (Asher Angel), a teenage orphan who can’t seem to stay on the right side of the law. Wait, don’t roll your eyes and assume that this is another gritty, dark DCEU movie. Billy is indeed an orphan and there is, likewise, a fairly tragic, realistic story to tell about his biological mother. But the film is still squarely focused on being a comedy.

Billy lands up at yet another new foster home, this one populated by a quirky potpourri of other orphans. But soon after arriving, Billy is unexpectedly granted super powers by an ancient wizard. The powers include being a hunky, muscled, superhuman adult (Zachary Levi). Upon saying the wizard’s name – “Shazam!” – Billy is able to transform back and forth, between adult superhero, and teenage orphan. The term “wish fulfillment” or “modern wonder” should be rattling around in your head about now.

A Wink and a Nod
Yes, this all is exactly as corny as you would think it is. But “Shazam!” knows that it’s corny, and leans heavily into the corniness, deriving a virtually endless stream of comedy from just how out dated a superhero Shazam is, and how silly his origin story happens to be. The nods and winks to the audience are too numerous to mention, and thankfully, the majority of the jokes land.

Billy and new friend, Freddy Freeman (Jack Dylan Grazer), set about attempting to understand the Shazam powers – how they work, how they can train them, and how best to use them. This is the majority of the film, two teenage boys grappling with superhuman abilities, with endlessly comical results. In other words, it’s a coming of age story, but told in a very interesting and unique way.

Deeper Than It Seems
There is a villain in the story, Thaddeus Sivana (Mark Strong), and indeed even a climax superhero fight. But even this is simply to cap off the journey of Billy learning how to be an adult, and accepting his new foster home. Thaddeus, likewise, encountered the wizard in his youth, but chose a path of evil. The simple, yet cleverly told, message is of choosing a path in your youth; one that will determine who you are in adult years. So even between the laughs, “Shazam!” manages to be deeper than it seems on the surface.

As far as superhero films go, this is one of the best in years, and definitely worth a watch.