The medieval town of Brescia, known for its food, wine, and architecture, lays at the foot of the Alps on Lake Iseo in northern Italy. In 2016, it was the hub of crisis for Christo’s second environmental work since the death of his partner and wife, Jeanne Claude. This time he had masterminded an artistic, yet dangerous, engineering experiment – a floating orange walkway across part of Lake Iseo.

Soon it became evident that city officials had allowed too many people to walk the floating path at once. Christo and his crew were panicked about a disaster. No one had counted on a flood of 55,000 people. Then a child was lost.

The portentous weather the night before the opening had been heavy with rain, wind, and lightning. Only by superhuman effort was the floating walkway assembled in time for the opening.

Thin material interacting with weather, geography, and humans, is a consistent theme of Christo and Jeanne-Claude’s free access large-scale installations. But with the death of his partner, Christo wonders how this particular installation, first imagined while his wife was alive and titled “The Floating Piers,” might work out.

“Walking on Water” documents the creation of “Floating Piers,” an environmental project objectively and literally named. Yet the film’s title also evokes a spiritual attitude towards both the work and its creator. The title, through a double entendre, implies that Christo’s genius transcends the ordinary.

His walkway, a 2-mile saffron-draped extension from land to island, is underlaid with big white high-density, interlocking polyethylene floating cubes. The resulting pliable pier moves with the waves and the fabric subtly shudders with the wind.

Christo does not require an entrance fee and all of his installations are for the joy of the people. He pays his assemblers with money, breakfast and a mid-day snack. Known as one of the wealthiest artists in the world, Christo finances his projects from the sale of his own artwork.

He says, “All our projects they are works of art and they are totally useless. We never do the same thing again.” They are quickly installed, left for about two weeks, and then disassembled. He does not comment on the meaning of his works. It is the viewer that has a helpless, unshakeable affinity to walking on water, where nature supports life and connects not just a shore to an island but people to each other.

Like Christo’s sprightly, intense energy at 83, the film with its staccato music punches along at a pace that creates suspense and interest. There are arguments and challenges – government permits, art buyer champagne galas, and ego clashes. Someone is sure something can’t be done, and Christo irritably yells out, “We’ll do it my way, total idiot!”

Like Christo, the writer/director of “Walking on Water,” Andrey M. Paounov, was also born in Bulgaria. Now an award-winning writer/director, Paounov has captured the essence of Christo as well as created a meaningful, suspense-rich film.

There is a spiritual calling from many directions at once: the mandarin color of Buddhist monks, the submission of one’s life to a path, the connection we find in bridges of all types, the role of nature in supporting connections, and Christ’s call to Peter to believe in a higher power. The people in Brescia, likewise trusting Christo, rush to do the impossible – walk on water.

The fate of the lost child and the crisis of crowds on the walkway enhance an already must-see film on perhaps the greatest artist of our time. “Walking on Water” opens at the Film Forum in New York on Friday, May 17, and in Los Angeles and San Francisco on May 24 with other cities to follow. 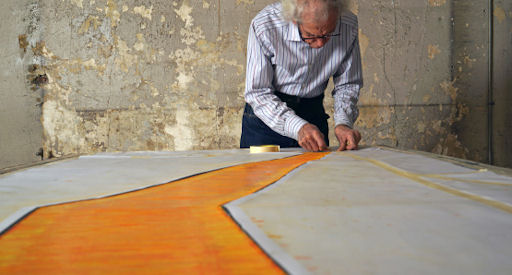 Tags: Andrey Paounov
Posted 17 May 2019 by Bev Questad in Reviews