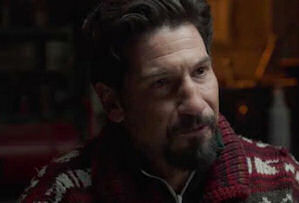 One mistake leads to another in America’s rust belt. There is a profound sense of loss in the setting– lost jobs, lost futures and lost lives. This is the setup for the greatest loss of all, the loss of innocence. What could have been a standard issue revenge flick takes a sharp turn when the victims decide to deal with an unspeakable crime in a way none of them would have thought possible. It is time for everybody to grow up emotionally and rationally, to fill in the muscle and the hormones and find out what caring really means.

Writer/director John Pollono took the stage by storm after the 2011 premier of the play and doubled down on that success with this film. The problem with the movie is it is too much Pollono. He writes, directs and plays the lead, the three steps to film failure. The two best actors in the film, Jon Bernthal (Swaino) and Shea Whigham (Packie), are submerged. Bernthal in his inexplicable beard and punk character and Whigham in his type-casted role pulled from his stellar work as Eli Thompson, crime boss Steve Buscemi’s feckless brother in “Boardwalk Empire.”

Although Whigham comes close to stealing the show, every scene turns back to Pollono, his full coverage beard and wooden acting sapping the power of the rest of the performances.

The opening scenes are fantastic, snow in the rust belt and a forgotten culture bulging with hormone drenched masculinity and seething with unbounded sexual femininity. Given the players this shapes up in the first ten minutes to be on a par with “Deer Hunter” or maybe even approach “Goodfellas.” Seventy minutes later it is still the same thing, lame-brained men fighting, spilling beer, breaking everything in sight and, mostly, making fools of themselves. Mumbled lines make the acting even more critical, unsuccessfully trying to focus on setting the tone of stoic deprivation and in so doing shortchanging the story itself.

Fair enough if this bears on the plot but a slam dunk hamstring if the crux turns out to be something entirely different. Even as the something different turns out to be a vitally important message it would have been better with more foundation. A solid ending and more than a few good lessons cannot turn around the endless repetition of the first two-thirds of the screenplay. Described as a “dark comedy” by some sources it is hard to peg a scene that results in laughter. There is only prolonged goofiness and misjudgment leading to sadness.

Matt Mitchell’s cinematography consists of close up face shots of, mostly, Pollono, which sadly shortchanges the power of the tough surroundings. Perhaps the screenplay is too much stage play, lacking the chops to engage the magic of the film medium. The jump from reading the lines and seeing the film is too little.

Good supporting work is put in by Spencer House as unwitting killer Chad Walker, although his lines are too few to remember and too foolish to be credible. How anybody would land in a grimy rust belt machine shop doing straight shots with an ex-con and two semi-demented friends and proceed to brag about his wealth and his fraternity is beyond belief. Another good try at an intimate, soulful noir just missing the mark.