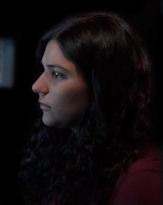 When a college student, Maia, views a film clip of a boy around 6 years old apprehended by one policeman and then kicked by another, she cannot just describe this as an incident in itself. She presupposes a context, guessing about what must have happened first so that she justifies the action her eyes see.

Ra’anan Alexandrowicz, the filmmaker, has explained to her that some of the clips she will view were taken by the government and some were taken by a human rights group. He does not tell her which are which. Surprised by Maia’s comments to the clips, he ends up making a documentary examining Maia’s reactions to these filmed examples of actual life and how her core beliefs affect her perception.

Maia, one of six students at Temple University, a research institution in Philadelphia, is a kind, peaceful woman who fervently believes in Israel. No amount of film footage, with varying degrees of indiscriminate harassment against Palestinians living in the West Bank, can keep her from imagining a fuller context – one that justifies her underlying assumption that Israel and Israeli people are highly ethical and do no wrong.

So even though she sees another young sleeping Palestinian boy, maybe also around 6 years old, woken up with a machine gun pointed at his head, her mind begins concocting a story about why this must be happening. She can imagine how terrorizing it would be for her to wake up to that, so she can empathize with the young boy, but she also begins to create a story – maybe a bomb is in his house and the soldiers are frantically ransacking the house to find it.

We view our life experiences through our own lens, affected by a ream of biases. Whether it’s about abortion rights, vaccinations, gender assignment or contentions between family members, friends or lovers, our individual lens of perception is helplessly influenced by something. So how do we ever know what is ultimately and absolutely right or even true?

As an award-winning documentarian, Alexandrowicz’s life mission is to not only show his audience reality, but also to influence their viewpoint. So, when he conducted this experiment with six Temple University students he was shocked that Maia was not influenced by what she saw. While he wanted to see how viewers process film clips of real-life footage, he soon found out, through Maia, that when images do not jive with a viewers’ fundamental core beliefs, their minds work to twist around the stories to match their values and presumptions.

Unfortunately, Alexandrowicz does not provide the impressions of the other five students in the study, so we don’t have any comparison to Maia’s reactions. But “The Viewing Booth” is still a remarkable study. It helps explain how the human subconscious mind can contract with our conscious mind to fool us into interpreting reality to fit our own fundamental bias.