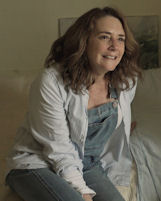 Her character having survived life with uber-rogue hubby Roger Sterling in “Mad Men,” one might think Lila had seen it all. Not even close, as Talia Balsam breathes new life into the fragmenting of a wife and mother. The luscious beauty of the Catskills and the trivial pursuits of teenage daughters set up the plot. This is too good to be true. Husband Edgar is distracted by ill-explained phone calls to another life. Wife Lila is distressed more by what she does not know than what she does. He is distracted by what is not there and she is distressed by what is.

As the beauty of nature is replaced by the despair of human life gone south, crashing engines replace the running and laughing through the grass and blooms. The coming of the moving truck, with ex Edgar detonating the horn through the walls of the summer place, gives notice there is nowhere to hide. Life insists on going on, even when there is no life in sight for Lila. Betrayal will find you out, eating at the fabric of your complacency from within.

You can run but you cannot hide.

If all this sounds dismal, it is. Without spoilers, the end is almost laughably blunt about the future in store for the tragic romantic partner. This dip into morbid simile can be forgiven because the film does such a good job of walking the tightrope over a maudlin swamp without falling in. Writer/director Hilary Brougher develops a remarkable chemistry with Ms. Balsam, perhaps born out of having been there and done that. The trick is a slow spiral into another world, a world of withdrawal and submission. The story is the fight against that and the partial victory in the bright lives of the next generation.

Andrus Nichols makes a brief appearance as good friend Gigi. Fighting cancer she refuses pain medication just as Lila refuses to compartmentalize the collapsing spaces of her emotional being. Lila’s daughter Sam (Macaulee Cassaday) looks to new horizons on a long distance sailing adventure and fails to comprehend her mother’s state of mind. Everybody has plans except Lila, whose plan of a faithful partner is submerged in homicidal and suicidal nihility. A coupling with 20-something Jonah (Michael Oberholtzer) ends with “You are nothing, we are nothing.”

The low key soundtrack emphasizes the passive dominance of nature and the creepy ending. There is a message of life going on in the presence of the newborn child, a curious symbol of hope and failure bundled into blankets. Loose ends abound as in real life leaving the viewer at loose ends to see the message. Perhaps there is life even in death, or a mandate to uphold past roles and traditions even when those traditions have turned sour.

Lush cinematography by Ethan Mass lets the setting do the talking. A good look at a promising cast and crew makes us want to see more, perhaps in a more positive setting.