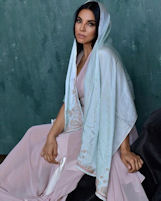 From an early age, Tilda Del Toro has had a fascination with film. She and her siblings were raised by her father and one day, he took Del Toro to see the Stanley Kubrick masterpiece “2001 A Space Odyssey” at an art theater in Chicago. She wound up falling in love with movies in the same way her father had. “Later, I saw ‘Gilda’ starring Rita Hayworth,” says Del Toro. “I rushed to find out who she was and learned that she was Spanish. She was one of the first artists that I saw that was Latin, and that was a huge identification for me. Later in life, I started to pursue visual art, but my interest always came back to film.”

When Del Toro grew up, she began intently pursuing acting, and she is an alum of Second City, the Improv Olympic and The Annoyance Theatre, which are all located in Chicago.

Recently, Del Toro starred in “Capone” with Tom Hardy, Matt Dillon and Linda Cardellini. She was immediately attracted to the role of “Mona Lisa,” a mysterious ex-lover of notorious gangster, Fonze (Al Capone). She explains, “I’ve always been interested in period pieces. To see that a project that has a Chicago connection was coming toward me with a whole new perspective on Al Capone was really thrilling to me. That, and the opportunity to work with such amazing artists like Tom Hardy, Josh Trank, and so many other amazing people on set.”

The actress embraced life on the “Capone” set and was continually in awe of the work that others were doing. “The attention to detail from everyone from the costume designer to the PA’s blew me away, and it’s because everyone believed in the work so much. And they believed in Josh and Tom because they were blown away by what they saw.” Every day on set left Del Toro with incredible memories that she will never forget.

Del Toro says, “After filming ‘Capone,’ I felt such a connection to a group of people who were putting their heart and soul into a project. I truly related to how people were functioning in terms of the art. As I knew before and am constantly thankfully reminded, we are here for serious play. We are agreeing to create and play creatively with all our ducks in a row – prepared and ready. That is what is needed for this industry, and an insight that I didn’t discover but was reminded of. In that comes all sorts of things like the need for flexibility and openness as well.” 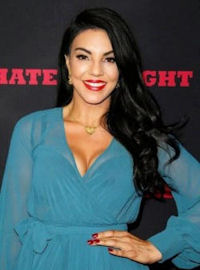 Her next film will be a passion project, “Julia.” Del Toro wrote the script and will star in the movie which has been 15 years in the making, from concept to script. When Del Toro was in high school, she saw the film “Educating Rita.” Even after she went on to college, her love of the film’s story stuck with the actress.

She says, “After acting in Chicago, I wrote a one-woman piece that was performed with other actors/artists at The Annoyance Theatre. It was about a girl in the barrio who knew everything there was to know about wine, and all she wanted to do was be a sommelier. Still, her life was filled with challenges like being driven to dope spots when she was a child and encountering family members who were addicts and gang members. Julia was born, and she was inspired by Rita, a girl who wanted something else in life. I have a passion for telling that story. The person who does not know what is out there, just somewhere in their heart knows that there is another way. When nothing in their environment supports it, but they go and become the seeker any way… It’s like an instinct inside someone.”

As a multi-hyphenate talent, Del Toro approaches each role from several viewpoints. “Early on, I was taught that you have to be your own director in some way when you are acting,” says Del Toro. “You cannot wait for the director to tell you what to do. You must show up with having thought of all aspects. So, in that aspect, I do approach the role from different viewpoints. Also, I’m very interested in photography and cinematography, so I naturally think of those aspects as they interest me so much. I do not try to change any writing on set. As an actor, it is my job to communicate the writer’s words, but I am open when things need to be changed.”

One of the biggest challenges that Del Toro has tackled since she entered the industry is what is called the “Imposter Syndrome.” “It’s the idea that I do not belong in something that I am passionate about, and that was my main challenge,” she says. “I can gladly say I’ve come to the other side of that. And I think people don’t like to talk about it, but it’s real. The other biggest challenge is the art of acting itself… Being diligent about learning and confronting parts of yourself in order to build technique and connection. It is in those times that you have to keep moving forward even though something feels uncertain. Your brain and body are catching up to something new!” 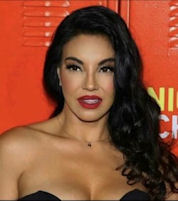 With so much of the movie and production industry shut down right now, one might think that artists are getting restless – but, not Del Toro. She is keeping busy personally and professionally. Del Toro says, “I have been walking! A lot. I go for 10-mile walks once every few days. It has been so therapeutic for me. There’s something about the air, the sun, and just continuing to walk for long periods of time that ease my body and brain. I’ve also been watching documentaries and writing a new script. I talk to friends as much as I can and keep my environment clean and inspirational.”

Del Toro has learned a lot of valuable lessons in her years in the industry, and she doesn’t mind sharing sound advice with those who also want to pursue a career in film and television. “Stay persistent and be specific about what kind of film and/or TV you want to pursue,” Del Toro finishes. “As an actor, understand and cultivate what you bring to the art. Also, within that, don’t just do what people tell you, go deep inside and ask yourself what you want as well. Many people told me to stop playing ‘beautiful’ roles – that I was the ‘security guard.’ There is no judgment in playing any role, and I played those roles, but it’s not what I wanted. I had to say goodbye to those who only saw me that way. And that’s ok.”