New director Pat Healy comes out swinging, or whining, in this very funny take on the genre of the kidnapping gone terribly wrong. Having had its world premiere April 25 at NYC’s Tribeca Film Festival, Healy co-stars with the redoubtable Taylor Schilling from the smash hit “Orange is the New Black” TV series. Shilling plays the kidnap “victim” in a simulated crime psycho-drama that Healy’s character does for a living. If you call that living. Executive produced by the Duplass Brothers, the film is an Official Selection at the Tribeca Film Festival and opens nationally this week. 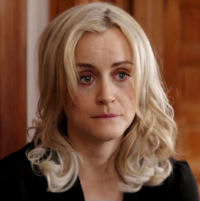 Healy plays Ray Moody, an entrepreneur with a novel business that has somehow been overlooked by the Fortune 500. Part of the reason could be that it involves committing, well, crimes. That the crimes are agreed to beforehand does little to justify the fact that they are so slipshod that real damage can, and does, occur. To get the best effect the victim cannot know when, where or how the nab will occur. As it turns out, Ray is perfectly suited. He barely knows how to drive, let alone commit a successful crime. All in the name of commerce.

Fair enough, until Ray gets a mystery phone call from Anna St. Blair (Shilling), accomplished professional business consultant. Like Humphrey Bogart, Ray should have known those gams were more dangerous than a .45. Then, again, Taylor Shilling fresh off the set of “Orange Is the New Black,” and looking her sexy L.A. best, would make any man drop his guard. She is not looking for therapy, per se, but seems to be in it for the kicks. Anybody who has seen detective noir number one knows this is going to backfire. But given that the crime is fake, it is hard to see where the fake client for the fake crime will go, especially when the perp is so incompetent he could not park overtime.

The $5,000 pay-day is not the “last big job” for Moody, but it will pay the rent and get him out from under the thumb of his shrewish sister Natalie (Alycia Delmore) whose husband is financing Ray’s start-up $50 at a time.

Debut writer Mike Makowsky’s screenplay takes every detective caper trope on record and turns each one on its ear. The criminal is the victim and the victim is the criminal. Even so, as Tom Hanks said in “That Thing You Do,” “Nobody’s going to jail.” The story is ripped from the headlines, then accidentally shredded and slapped back together with duct tape. Real blood is shed and real pain is inflicted, but probably very little blood and pain compared to what Ray went through in junior high homeroom.

The cast is nicely trimmed to mostly just the two leads. Spare and lean as Olivier-Caine’s “Sleuth” and with Healy channeling William H. Macy’s car dealer in “Fargo.” The poppy and upbeat soundtrack keeps time with the bright cinematography, eliciting the odd laugh when the going actually gets rough or an almost-real crime scene is popped into the screenplay.

“Take Me” is a giant success for Pat Healy, has good work by Taylor Shilling and is another notch in their gun for those frisky Duplass brothers. 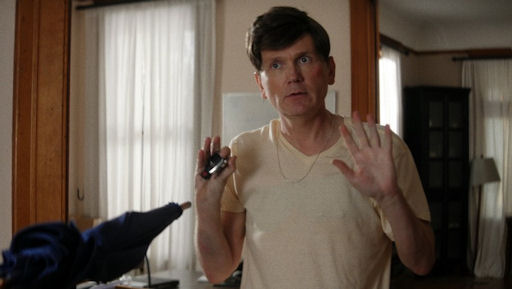