More psychological thriller than war movie, “The Wall” is a tense, atmospheric cat-and-mouse story that carries broad undercurrents of the cultural and religious war in the Middle East. 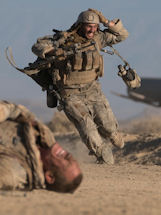 American snipers Isaac (Aaron Taylor Johnson of “Nocturnal Animals”) and Matthews (John Cena of “Trainwreck”) are dispatched to stake out the scene of a horrific slaughter in the Iraqi desert. A half dozen construction workers have been killed while building a section of an oil pipeline. “The war is over” intones the American. “Not for me” replies the adversary.

Everything in this lean drama is covered in desert dust. After 20 hours laying silently in deep cover, the two snipers themselves are covered in dust. The construction equipment, pipeline sections and bales of undefined shrink wrapped flotsam are covered in dust, already giving up the ghost and succumbing to the never-ending wind and sand. The grim and the dust echo Akiro Kurosawa’s dirty, sprawling fist fights. There is no dignity in this war. Everything is too close and too personal.

Losing a miniscule bit of their grip on their seemingly hopeless mission, the two are pinned down by a mysterious sniper. The sniper himself is more of a ghost than a physical being. He never appears in the film. We only hear his voice over the intercepted radio channel that he has somehow accessed. Indeed, no one knows there even is a sniper until the American sees the dead, sprawled in their construction vehicles, have all died of head shots.

This is a magnificent moment. We and the soldier realize at the same time that the Americans, who thought they were stalking the sniper, are in fact the prey. The sniper waited silently for far longer than the soldiers, letting them set up, suffer in the heat, lose patience, and finally expose themselves. But there is far more than that in the offing. The legendary Juba (the best voice of the year by Laith Nakli) is just getting started.

The stripped-down set includes the construction scene, a large garbage pile, a crumbling wall, the wind and blowing sand, the heat and the three men. The Americans are calling for help but the sniper is able to over-power their signal, fake an American accent and twist the call for help to his own ends. The loose laid stone wall that is the soldiers’ only cover turns out to be the remains of a school. The sniper, a former teacher. The trash pile is the symbol of everything the Americans hate about the desolate wastes of the Middle East. For them it is something to be lived through to return home. For the sniper it is all the home he has left, a place to live, hide and die.

The movie is directed by Doug Liman (director/producer for various films of the “Bourne” franchise), and written by first-time screenwriter Dwain Worrell from his 2014 “Black List” script. Cinematography is by Roman Vasyanov and echoes his gritty and atmospheric war lensing in Brad Pitt’s riveting “Fury.” A neat, tight and mesmerizing movie.