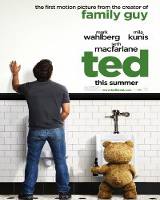 In an outer Boston suburb in the ‘80s, a young boy named John (Mark Wahlberg) spends his Christmas not with the neighborhood kids – who like to beat up the local Jewish kid — but alone wishing that he could have a best friend. When he receives a stuffed teddy bear for a present, he wishes that the bear would be real. When John awakens the next morning, his wish has come true and he has a new best friend, Ted.

After some shocking reactions from his parents, we are treated to a musical picture montage showing us Ted’s rise to fame as the world comes to accept the existence of a living teddy bear.

Twenty-seven years later, we meet up with Ted and the now-adult John. Although they are both older, neither has grown up. We see John evading work by getting constantly high with Ted — to the dismay of his girlfriend of four years, Lori (Mila Kunis). Lori — who is a successful associate at a public relations company — gets fed up with the immature slacker lifestyle and lack of motivation John has while hanging out with Ted.

She tells John that Ted needs to move out, so John helps Ted get a job at a local grocery store and things seems to be working out fine. But when John blows Lori off again to meet a childhood film hero with Ted, she breaks it off with him. John wants nothing to do with him and now Ted must be the one to grow up and find a way to make things right. Can he possibly become the positive influence on John he should have been all along?

“Ted” was written and directed by Seth MacFarlane, who provides the voice of “Ted.” MacFarlane brings the same qualities and humor to this twisted comedy about a foul-mouthed teddy bear and his relationship with his owner/friend that he has to his long-running cartoon series “Family Guy.” The movie is abrasive and shocking at times, but the most important aspects of the film you never question.

Yes, Ted is alive and he is less than cuddly, but you embrace him and his demeanor very quickly and although you love the dynamic between Ted and John, you still feel sorry for Lori and what she has to put up with. She is never vilified and the character could have easily come off as the nagging girlfriend, but MacFarlane chose to create another villain in the film in the form of a crazy Ted fan named Donny (Giovanni Ribisi) and his demented son.

The chemistry between all of the leads is outstanding and the comedic timing is perfect. The film is witty, smart and seems fresh compared to most other cookie-cutter comedies that have been inhabiting theaters as of late. It has the same shock and awe to the jokes as 2009’s “The Hangover” or 2011’s “Bridesmaids.” It’s the kind of movie that you will have to see more than once due to the fact that you missed half of the jokes because the audience was still laughing loudly from the previous joke.

The film features amazing performances from MacFarlane, Wahlberg, Kunis and the great extended cast including talented comedians or character actors such as Joel McHale, Alex Borstein, Patrick Warburton, Matt Walsh, Jessica Barth and Jessica Stroup. Plus, there are many hilarious cameos by celebrities you weren’t expecting. This film is well rounded in showcasing some great performances and pitch-perfect comedy writing.

Everything that you would expect from a MacFarlane product is present here with tons of pop culture references, jokes that hang in the air just long enough to make you squirm, filthy talk, constant racist remarks and an underlying message about friendship and learning to grow up. The film as a whole is a success, with Wahlberg giving one of his finest comedic performances yet.

Although I did love the film, I wasn’t the biggest fan of the last 20 or so minutes of it. The film takes a dramatically different turn in tone and pacing that makes the ending feel disjointed from the rest of the movie. It does come back around at the end, but the massive change felt a bit jarring and pulled me out of the movie somewhat. But that tiny blunder didn’t hinder my overall enjoyment of the movie, and the comedy, crassness, great computer graphics on Ted and random scenarios the duo find themselves in was more than enough for me to suggest this movie to any fans of R-rated comedy. Simply stated, “Ted” is the funniest comedy I have seen this year.

If you are in the mood to get down with a dirty bear, then head over to your local cinema and check it out because it’s in theaters now. “Ted” is rated R for crude and sexual content, pervasive langue, drug use and nudity.