Filled with the simmering sensuality of Nicole Kidman’s “Dogville,” this movie starts out slow and builds to a delicious climax. Based on the 1966 novel by Thomas Cullinan, the story starts with a young girl from the nearby Farnsworth Seminary singing in the Virginia forest. She is startled to find Union soldier John McBurney (Colin Farrell) alone, injured and dying. Farrell reprises the part played by Clint Eastwood in the 1971 version of the movie. 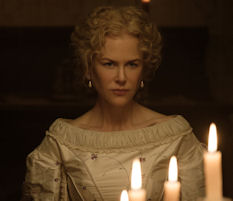 Sofia Coppola took home the coveted Best Director award for “The Beguiled” at the 2017 Cannes Film Festival. This is a remarkable achievement as she is only the second woman to have won the award. The cinematography is by Oscar nominated Philippe Le Sourd. It is saturated with dreamy short focus shots that emphasize the intense sensuality of the women (and girls), all of whom are beautifully made up, coiffed and costumed in a presentation that borders on pornographic. The background is the phallic columns of the antebellum mansion shrouded in the weeping branches and twisted vines of fertile land gone feral.

As governess and spiritual leader Martha Farnsworth, Kidman brings elements of her great performances in both “Dogville” and “Cold Mountain” to the story. Despite that, her work fails to measure up to many of her earlier movies. Lars von Trier and Anthony Minghella were not only able to bring out better performances, but they were able to put together more complex packages of pathos, mystery and tension.

Martha exudes a pervasive fear of sexual intimacy. Although she is the chief, she has holes in her emotional presence that could have been shot with a cannon. Of the seven women and girls at the seminary, all but one fall for the injured Corporal McBurney. From the start, one of the younger girls refers to him as a “blue belly,” a southerner’s term for northerners implying cowardice and viciousness. The author starts with the callous depersonalization that is war and moves to redemption through loving care. Then he executes a cunning twist that shows us that nothing is as it seems, and all is fair in love and war.

Kirsten Dunst will take home the acting kudos for her portrayal as Edwina Dabney, a teacher under the supervision of head mistress Martha. From the start, her demeanor is one of tedious boredom, verging on hatred, as a result of her pedagogy at the school. In this story of love, betrayal and revenge, Edwina is the one caught from all angles. She loves, she is betrayed, she takes revenge and she suffers not only the loss of her lover, but the loss of her imagined paradise of a life in the outside world. Her story is one of escape mistaken for love.

Alicia (Elle Fanning) rounds out the trio of leads as the eldest student and the last of the three women lusting sexually for McBurney.

Farrell’s performance is good but hampered by the screenplay. There is no comparison to his portrayal of the doomed hit man Ray in writer/director Martin McDonagh’s “In Bruges.” McDonagh’s upcoming “Three Billboards Outside Ebbing, Missouri” with Frances McDormand and Woody Harrelson promises to be a dark and explosive thriller. In the meantime, see the original 1971 “Beguiled” before taking in this version. 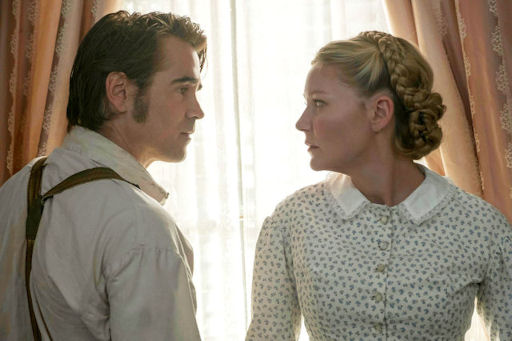