Tom Cruise is back, heading a star-studded cast and crew in the kick-off flick of the summer B-movie season. He reprises his Maverick role as Nick, an uber-soldier who must do it his way. Along with nominal buddy Jake Johnson (TV’s “New Girl”) as Chris, Nick wades through decades-old action tropes while new director Alex Kurtzman tries to keep up. 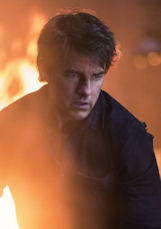 One of six writers responsible for this glossy mashup, Kurtzman’s formula is to cut and paste a scrapbook of past successes and hope Cruise will carry the day. Another of the fab six penning the movie is “Indiana Jones,” “Jurassic Park” and “Mission Impossible” writer David Koepp. It shows. Half of the movie is Nick and Chris channeling Harrison Ford dealing with bat, spider and rat attacks. Running ahead of the desert dust storm that forms the head howling the message “Howl, howl, howl,” the two survive car crashes, airplane crashes and collapsing stone slabs the size of Grand Canyon.

By the end of the movie, Nick is swimming under water for endless distances amongst flooded caskets and floating semi-human jetsam. If you haven’t seen Shelly Winters in her epic sub-marine jaunt in “The Poseidon Adventure,” do it before you see this movie. If not that, check out a Busby Berkely swimming pool dance routine to get a better idea of the wackiness. Remember, this is in 3-D.

As highly trained “advanced recon” soldiers (think SEAL or army ranger), Nick and Chris are after everything they can steal, and seem to be pretty good at it. This is not a war flick, although the military is required for transport from sacred grave to sacred grave. Nick is commander in chief of the looting division and Russell Crowe is the exorcist in chief responsible for fending off the worst infestation of soul destroying world domination since Hollywood.

Crowe plays Dr. Henry Jekyll (yes, you read that right) in the funniest performance of his career. He has a problem with extreme carpel tunnel syndrome in that his hand is rotting off his arm. The only way to stave off putrefaction is massive injections delivered through a gantling gun hypodermic. One hand must grapple and hold the problem wrist in a death grip while the six hypos do their work. Without question, this is the funniest self-treatment since Peter Sellers in “Dr. Strangelove.”

Annabelle Wallis joins Nick as Jenny the super-smart, super-beautiful archeologist who is given the impossible task of keeping him on task. She is doomed, of course, and boy are we glad for that. Failing in developing any screen chemistry with Cruise, she spends most of her time trading snarky remarks about Nick and her sex life. Also, she explains how important the mummy is, lest we miss it. The buried corpse of princess Ahmanet (Sofia Boutella of “Star Trek Beyond”) is the beginning and end of mankind, a treacherous lying curse, an unconquerable super-human evil, and a huge franchise opportunity.