The superficial story is one of a man who is fed up and not taking it any more. Nobody appreciates him, so he is going to deprive them of that most valuable thing in their lives. Himself. So begins writer/director Robin Swicord’s film adaptation of E.L. Doctorow’s adaptation of Nathaniel Hawthorne’s short story “Wakefield.”

As the titular character, Bryan Cranston has never been better. Wakefield’s vanity and self-absorbed profundity are a perfect parallel for Cranston’s Walter, the “Breaking Bad” chemistry teacher gone wrong. Both are exceedingly brilliant and yet must work to subvert their egos for the benefit of ones they love. As that labor of love becomes too much, they lose touch with what means the most to them. They become unmoored and primal in their behavior and emotions.

Wakefield is a successful lawyer (his big paycheck validates his success). As a litigator, his competitiveness is the key to his status. His weak point is compassion. As it turns out, his remarkable ability to lie at the right time, the key to his success as a lawyer, paves the way to the failure of his marriage. His compassion, emerging at a most unexpected time, provides what might be his redemption.

Swearing he will take no more from the family that has humiliated him, the modern Wakefield takes to the streets. Although he lives in the obscenely hilarious attic above his garage, to find food he makes nightly forays into the garbage of those still functioning as normal human beings. He learns to fight like an animal, and, when he cannot fight, to run like one.

As Wakefield says, “I never left my family, I only left myself.” His physical transformation is so complete that when he comes face-to-face with his wife, the mother of his children, she shows no sign of recognition. At this, his mission is complete. Not the mission to make the world sorry he left but his mission to show himself that he never meant that much in the first place.

The situation is not without humor. After the first 24 hours of disappearance, the cops are called. They ask the usual questions and then we and Wakefield watch as they leave, making derisive small talk about the breadwinner’s watershed decision. Or, perhaps, even worse, making small talk about something else, having already forgot about their missing person. They are more concerned about finding a good cup of coffee than about finding Wakefield.

As his imagination roams more and more to his confronting his family with his surprising non-death and their shock at his re-emergence, identical to that at the time of his leaving, we have a great foreboding. His twisted and miniscule self-image will surely be mashed into crumbs at the renewed onslaught of derision that awaits. Alas, we will never know for sure. One can only imagine.

“Wakefield” is a great story told almost entirely through voice-over narratives and the fuzziest of second-hand images. The director forced Cranston to do all his garage voyeur scenes watching his wife (Jennifer Garner) and their two daughters over remote video monitors, to better feel the distance Wakefield has placed between himself and the real world. 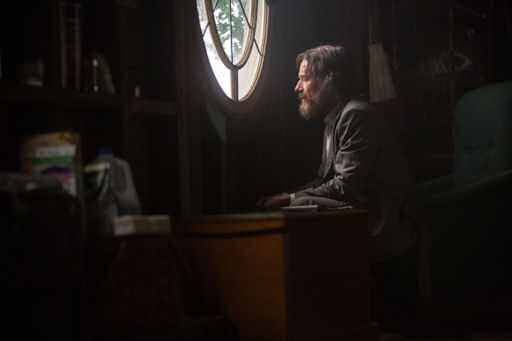