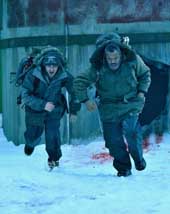 Emerging film-maker Jeff Renfroe tried hard on this slightly modified zombie flick, with good results for an emerging film maker. But the film is still inexcusably derivative and has little to recommend it over a thousand other thriller monster movies.

The best thing about the film may be the set. Reportedly the first movie to be shot at the decommissioned NORAD (North American Aerospace Defense Command) base in North Bay, Ontario, Canada, the set design augments this wonderfully creepy exterior with great interior shots. The result is exactly where one would expect a dying civilization to end up when the going gets really rough with global climate change.

Global warming led to new engineering counter measures that caused cooling. The cooling went haywire and plunged the world into a never ending winter. This is a credible twist on the real life sagas of importing cats to control mice, having the cats go out of control and so developing cat eaters which can only be controlled by nuclear weapons. Or something like that. In any event, the NORAD station is wonderful, filmed in all of its horribly forbidding glory during some sort of very cold looking snow storm.

The inside of the station has all the requisite impervious steel doors and arcane, worn out piping and high tech stuff that is now outmoded and abandoned. The best of human ingenuity, proved hopelessly outgunned by the savage elements. Frightened, overwhelmed and rapidly dying out, humans huddle in the frigid corners of the steel walls in an attempt to hide from the revenge of a really mad Mother Nature. But there is no hiding from Mom, and we all know that.

The surviving inhabitants are being stricken by a fever that has no cure, at least no cure amongst the desolate remains of medical hardware and knowledge left in the colony. As a result, those infected are summarily shot by assigned executioners who are rapidly losing their minds. So far, this is a very good plot. The colony is raising rabbits for either research or food but even the rabbits are failing to reproduce and are on the verge of extinction. Then there is a loss of contact with a neighboring colony and Laurence Fishburne and two others set out to find the problem. Goody!

They find the problem all right. Or, rather, the problem finds them. And, the problem is….OK, you already know the answer, but this review will contain no spoilers, even though they would hardly be spoilers.

At this point, the plot, teetering on the brink of B movie failure, freezes to death like the doomed rabbits in the steel silo. There is an area about ten miles away that is, inexplicably, warming up. But the people in the colony are trapped by the horrible result of climate change evolution. A first explosion fails to knock out the scourge, the second explosion frees the last humans to struggle to what may be the Promised Land.

No bunnies were hurt in making this picture, although a few audience members may be hurt when they fall asleep during the last half and hit their head on their cup holders.

Several good maulings and a few good sword fights with what appear to be dull hatchets and rusty saw blades. Remarkable skull splitting with ordinary kitchen implements (do not try this at home kids, even if your rabbit is dying). Men, women and children get it with pitchforks, hoes and surplus US government automobile repair accessories. One human bomb scene (Fishburne had to be on another film the next day) and several pleading, begging executions with a rifle at close range.

The film would have been much better if the mutants themselves had not been shown. The screenplay could have concentrated on the unraveling of society when the chips are down and not on the simple minded physical destruction of the results of the climate mess. After all, when the big one hits, it will be our killing each other that spells the end of society, trampling over each other for the last food and shelter, or dying in loneliness, afraid to share what little we have. But the film did not take the heavy psychological, sociological path and instead went the way of the slaughter fest. It probably kept the flick on schedule and in budget, but it resulted in something that looks and feels more like a training exercise than a real movie.

Here is hoping for some better from these film makers next time around. 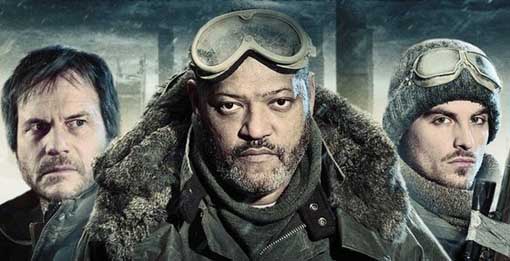