We thought Jim Jarmusch was getting serious with “Patterson.” But now this. A most glorious send-up of zombie films complete with anarchic cheerleading and bonus jabs at liberal smugness. A superb cast of thoroughly wasted performances sacrificed on the altar of heedless enjoyment. A magnificent loser of a success.

Re-uniting and re-igniting with Bill Murray, Adam Driver and even Tom Waits, the director is able to leverage his fondness for the samurai for a nicely placed karate kick to the loins of the politically correct. As science tells us, polar fracking has finally caused the earth to tilt off its axis and spin not east to west, but sort of northwest to southeast. Like a dime store gyroscope, or an early attempt at powered flight, earth is no longer moving as a well-oiled ball-bearing, but like an ersatz pool ball bounced off the rails one too many times by the greedy mold of the human stain. When this happens, as we know, up come the zombies.

Murray, Driver and Chloë Sevigny garner most of the screen time as small town cops who discover and narrate the unchecked migration (where is The Wall when we need it?) of the undead into Centerville, “A Nice Place to Live.” This is not so much a movie as it is a fast sequence of references to, and inside jokes about, other movies. Nobody will get them all, probably not even the director himself, who was having such a good time he may not have realized the multitude of tropes he was bringing into play. Like the zombies themselves, the film spins wildly, and funnily, out of control.

After “Ghostbusters,” Murray should know about zombies, but he does not and so must rely on Adam Driver to wise him up. Murray’s character, police chief Cliff, plays the straight world, in denial about global climate change, the evils of oil exploration, the wastefulness of full sized cars and the dangers of doughnut consumption. Driver’s character, Officer Ronnie, is the tall one who drives the minuscule gas-sipping smart car that seems to not as much transport him as encapsulate him. Sevigny’s Mindy drives a hybrid, walking the fine line between the old and the new.

None of this makes a whit’s worth of difference, because when the frack hits the fan we will all go down together. A brief appearance by Tilda Swinton and solid supporting work by Caleb Landry Jones makes us yearn for more of both. If this film has a failure, it is that there are too many funny people doing too many funny things. One is sorry it all has to end, even the all-too-realistic eating of the innards.

Excellent theme music developing the theme that, well, the dead don’t die, and excellent breakage of the fourth wall as Officer Ronnie explains the theme music and reiterates that “This will not end well.” If writer/director Jarmusch expects us to believe that, he has another thing coming. Kill the head! 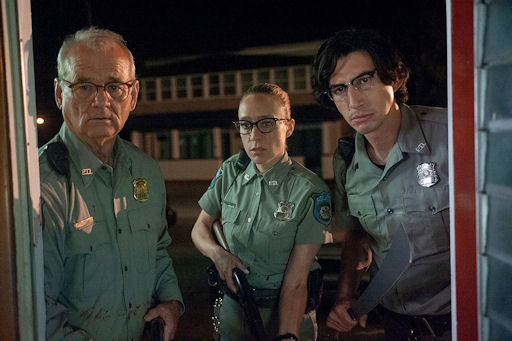