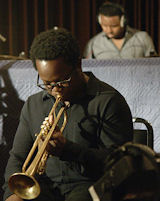 The only way to write an honest reflection on a Blue Note Records documentary is from a dark inner city bar where James T is on stage and the audience only stops their chatter to clap between performance pauses. James tells me it’s that chatter that gives the musician freedom from expectation and a chance to experiment.

Early jazz in the ’20s and ’30s was hard to understand and also played to plenty of noisy clubs. Two white guys, inspired by early recordings in their German homeland, ironically ended up the first record producers of this distinctly Black American music in New York City.

The Recording Story
“Blue Note Records: Beyond the Notes” tells the story of this now famous jazz recording company founded by Berliners, Alfred Lion and Fancis Wolff. Currently, it is presided over by busy Dan Was (aside: Was recently joined former Grateful Dead guitarist Bob Weir and drummer Jay Lane to form Bob Weir & Wolf Bros).

Blue Note began in 1939 by recording Meade Lux Lewis. At one point, their sound engineer used his parents’ living room to make the recordings. Then came the game changers: Thelonious Monk, Miles Davis and John Coltrane.

As Lou Donaldson, signed by Blue Note in 1952, explains, “The music world was full of scoundrels, but not Frank or Alfred.”

Documentary Specs
This documentary has gotten a lot of press and in 2018 was selected for screening by more than 20 film festivals.

Swiss filmmaker Sophie Huber is the producer/director along with an astounding crew of over 80 in addition to 16 jazz artists, 14 associating companies and seven European financial backing enterprises. This is the second documentary she has headed up. She’s got the networking, commitment, and support, but does she inspire the audience to care?

Impact
Frankly, though this is a well-made film detailing the rise of a company, there is plenty more room for the stories of the makers of that company. While Huber gets a series of musicians to extol the greatness of Blue Note, she misses what would give it a meaningful impact — the stories behind the scenes.

With a little sleuthing, I learned some interesting stories about Lion and Wolff’s personal lives. Why were these things omitted? I was also left wondering why the nine early Blue Note females weren’t mentioned in the tributes to the early Blue Note musicians.

There are a string of accolades about the role of Blue Note and the founders, but the specific stories, like the one where one of the founders becomes involved with one of the musician’s sisters, are missing as is the context of The Great Depression, racism, treatment of women, drugs and alcohol.

Huber records Robert Glasper, signed in 2004, said, “Your experiences and what you’ve been through in life makes you sound the way you sound. Most great artists come from messed up situations.” Just a couple of examples of this would have added power to the Blue Note story.

Foundation for More
“Blue Note” provides inspiration for what I hope follows – a more storied and contextualized film on the lives of Lion and Wolff and how they empowered the free expression of generations of musicians. 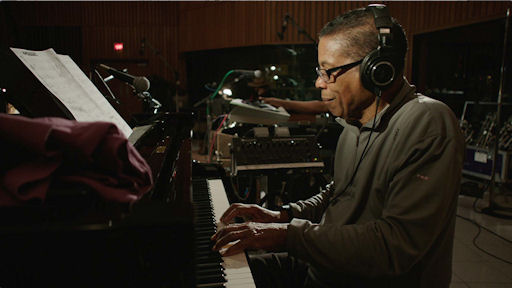 “Blue Note Records: Beyond the Notes” opens June 14 at the Metrograph in New York City and June 28 at the Laemmle Santa Monica in Los Angeles.

Note: Review submitted by Bev Questad, on location, from the Loowit Pub in Vancouver, WA.