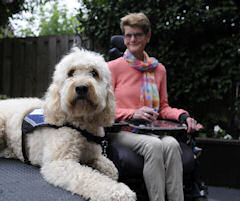 At age 13, Edith was blinded from the impact of a German bomb in the Netherlands. Undaunted, she learned to gallop on a horse while her guide dog scampered beside, trying to keep up the pace. What a great life for several dogs, all who lived and died under Edith’s loving care. Now she has Makker, who jogs with her down farm paths and park trails. At rest time, all he asks for is a little petting.

Heddy Honigmann has compiled the stories of six people in the Netherlands and their specially trained service dogs. Each owner is completely and totally in love with the dog that guides, comforts and watches out for them. The most breathtaking vignette shows a shaggy, blond Kaiko and physically handicapped Erna Aarsen. Erna mobilizes with a wheelchair, but she cannot move her limbs. She has short ropes attached to her refrigerator and kitchen drawers so that Kaiko can easily open and fetch items and then gently close them with his nose.

At work in her bed, Erna, looking attractive, professional and efficient, types up items and has them printed. When Kaiko hears the printer click on, he trots to the printer and gently fetches the freshly printed document and brings it to her. At nighttime he pulls off Arne’s clothes and then pulls up her comforter so that she is warm and snug. In the middle of the night he helps her move to another position and re-organizes her comforter.

In the morning Erna, who is losing her strength, holds her syringe and Kaiko pushes the needle into her body. She says, “He is my freedom.”

Each companion duo in “Buddy” is a study in compassion, unconditional love and mutual dependence.

Heddy Honigmann (1951), the filmmaker, is of Jewish-Polish heritage but born in Peru. In 2003 the Museum of Modern Art in NYC honored her with a retrospective of her films and in 2011 a similar tribute was presented in Paris. In 2007 she won the Canadian International Documentary Festival award for Outstanding Achievement.

Honigmann dedicates “Buddy” to her grandmother, writing: “To my grandmother Stefanie, who taught me to love and trust dogs, our most loyal friends, true allies and the best solace for hidden pain.”

“Buddy” is a tender story of human-animal connection created by one of the greatest filmmakers of all time.