Review: The Death of Stalin 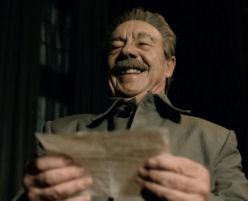 From the moment the opening scenes flash to Adrian McLoughlin playing Josef Stalin you know this movie is going to be nuts. Like the rest of the actors, Mc Loughlin does not even try for an accent. He blurts out his lines as if he was calling his dog and is having a great time doing it. In the middle of a banquet with his not-so-suffering comrades, Stalin stops everything to call Andreyev (Paddy Considine), who is managing the sound booth for a full blown symphonic orchestra. He wants a recording of the performance immediately when it ends, or else. “Somebody tell me we are recording this performance!” he begs. They are not recording.

So begins Armando Iannucci’s farce about what happened on the day, and in the following week, that Stalin died. OK, what might have happened. OK, what almost certainly did not happen, in any way shape or form. What we do know is that Lavrenti Beria did not do so well. Through no fault of Simon Russell Beale – who plays him to a hilarious fault – he gets on the wrong side of Joseph’s dimwitted son Vasily (Rupert Friend) and the rest is history.

At least, history in the eyes of writer/director Iannucci and the rest of his brilliantly off-center writing team. As Beale turns Beria from a psychopathic sadist into Zero Mostel’s Max Bialystock, we see more than a little Mel Brooks creeping out from the cracks of the Kremlin. From the first words of McLoughlin’s lips, he is channeling Brooks hisself, Governor Lepetomane in a Mao jacket.

Then the heavyweights arrive. Andrea Riseborough as Svetlana Stalin, Jeffrey Tambor as Georgy Malenkov, Steve Buscemi as Nikita Khrushchev, and Michael Palin as Vyacheslav Molotov. In one of the few films in which Buscemi’s character is not snuffed in the end, he does quite nicely in this one. Khrushchev eventually pulls the brass ring of leadership in Stalin’s wake, of course, Brezhnev is watching over his shoulder. Tambor is absolutely fantastic and over the top, pacing and fretting his way to General Secretary immediately following Stalin’s death. The perfect communist counterpart to the American vice president nobody wants to see become Number One.

Tambor and Buscemi execute every possible pratfall as Krushchev tries to grab the spotlight from the hopelessly feckless Malenkov. Goofy as it gets, this flick is not for the faint of heart. The potty jokes and profanity abound and there are no punches pulled when Beria goes to work on dissidents. The complete lack of accents must be fully appreciated in the same way Brooks used the “Springtime for Hitler” theme, the familiarization of the characters is the best way of disarming them. Disarmed, we can approach and, perhaps, get past some of the evil past.

Will it work? You will have to see the movie and judge for yourself. Possible Oscar nomination for Jason Isaacs playing a Field Marshal Zhukov so covered in medals in must have been hard to stand up.