With footage of Gloria Steinem and the Women’s Liberation Movement, anti-Vietnam War protests, Hendrix posters, and Janis Joplin, this 1971 dramatization of the battle for women’s suffrage in a little village in Schweiz is a reminder, especially true with today’s havoc in Hollywood and politics, that power corrupts. 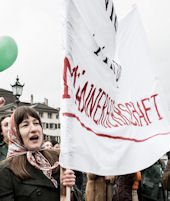 “The Divine Order” begins as Nora fixes breakfast for everyone, walks her bike uphill to town, helps her sister-in-law fold sheets, washes and hangs clothes out to dry on the line, vacuums, cleans everyone’s rooms, including her father-in-law’s while he reads the paper, makes meals, clears up everyone’s dishes, and washes them day in and day out.

Her relief begins when she sees an advertisement for a job at a travel agency. Her husband disagrees with the idea of his wife working and carries her off to the bedroom, laughing that she can have another child to keep from being so bored.

Soon traditional, shy Nora is greeted in town by a couple of spunky women who are campaigning for the right to vote. An election is coming up soon in February. Before Nora knows it, the women have cajoled her into supporting a town hall and being the spokesperson.

The arguments facing the women in Schweiz are similar to those faced in America’s 1920 suffrage campaign and the later battle for the US Equal Rights Act (not yet passed).

It’s against the Bible. Men know best. Men will feel emasculated. They will have to cook and then turn into homosexuals. Women will meet men at work and become unfaithful. They will become lesbians. The family will disintegrate. Society will be destroyed.

How the women in Schweiz, a canton in Switzerland, brilliantly and bravely deal with these issues is the substance of this drama written and directed with alternating realistic gravitas and humor by Petra Biondina Volpe. Though scenes related to female sexuality will limit its audience, the rest of this modestly delivered high-quality film is a winner and Switzerland’s 2018 Academy Awards entry as Best Foreign-Language film.

While this film explains what happened in 1971 to trigger an expanse of social conscience, respect for women and the liberation of both men and women, the film’s endnote explains the Swiss history, not ending until 1991, when full national suffrage was finally mandated by their 1981 amended constitution – not a vote by men. 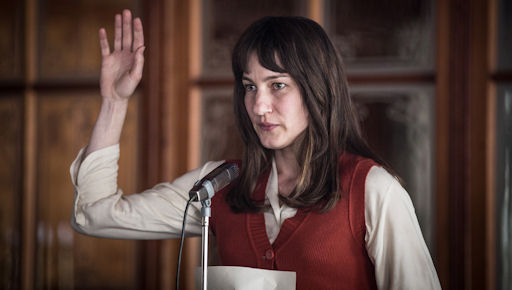 “The Divine Order,” a courageously crafted drama that spotlights the corruption dominance spews, opens in LA on Nov. 17.