The best movie ever made for cat lovers opened this year around the world. The setting, deep in the city of Istanbul, is simply magnificent. Filming from the point of view of the city’s roaming cats amplifies the grandeur of one of the greatest nations in the world. Every frame radiates the luscious history of this crossroads of Europe and the Middle East.

From what we can tell, the cats may have been there as long as the people. For thousands of years the people have reacted to the roaming urban animals with humor, empathy and a nod to the eternal bond between mankind and the environment.

The cast is entirely cats, selected from the hundreds of thousands that roam free in the city. Mom Bengu and tomcats Deniz, Duman, Gamsiz play (who else?) themselves. They cultivate relations with their benefactors, defend their territory and, above all, remain solidly independent.

These cats are free spirits, moving from human to human as the strokes, and the food, dictate. Living off the wealth of the land, they are not freeloaders. These felines have a synergistic relationship with the co-habitating humans. The cats recycle garbage of all kinds, refuse that might otherwise breed rodents and nasty micro-organisms. In this way, for millennia, they have headed off the spread of epidemic diseases that might have wiped out millions. 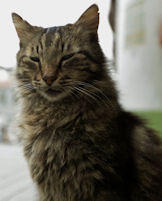 Rodent problem? Not if you keep the kitties happy. Feed them with a minute quantity of spare fish and they will guard your fish stand forever. Even those who do not relish the thought of cats prowling around the market would agree they are preferable to rats. The dogs shown in the movie do not seem to register the cats even being there. Perhaps the attitude of the people towards the felines has been transferred to the dogs. We all must get along and we all have a place and purpose on this earth.

Director Ceyda Torun boards fishing boats, runs her camera at street level through markets and films this animal kingdom from a delicious variety of angles and in a gleeful variety of spaces. An abandoned box in a pile of stored hardware becomes a family home. These are not showy animals. They are quite content to mind their own business most of the time. But when hunger comes they are the social workers of the inner city. For the loveless and for those lovers with room in their heart for more, they are there to hang out.

Nobody owns the cats and they never will, any more than a person can own the air.

Claiming no owners, the cats of Istanbul live between two worlds, neither wild nor tame — and they bring joy and purpose to those people they choose to adopt. In Istanbul, cats are the mirrors to the people, allowing them to reflect on their lives in ways nothing else could. Torun lived among these cats and then to New York City where such tame, and yet wild, animals were nonexistent. Permanently transplanted to Hollywood, she misses the cats and their loving yet wild relationship with earth’s troubled humans. 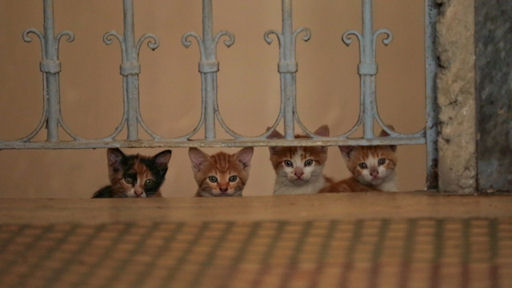