Martin McDonagh’s latest has more in common with his brooding “In Bruges” than with star Francis McDormand’s signature “Fargo.” As she did with her North Dakota persona, she does with Mildred in Missouri. Only this time it is in spades. The sing-song, live and let live attitude of the northern tier is replaced by the Show Me attitude of the feuding clans of lore. Mildred is mad and everybody is going to know it. 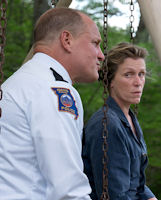 The titular three billboards are aimed at easy going long-time police chief Willoughby, played with perfection by the master himself, Woody Harrelson. It is hard to say which character Harrelson plays best, the criminal or the cop, because he is such a joy to watch doing either. He brings a marvelous perplexity to the immense power of the big law enforcement frog in the small pond. The chemistry between the two leads is magical, some of the best work this year.

Great films are made great by supporting performances. Caleb Landry Jones’ portrayal of small town businessman Red Welby may say more about like in rural America than the roles of either of the two leads. Having, apparently, just inherited the billboard business at the heart of the screenplay he suddenly finds himself in a Trumpian kettle of fish. Pasting Mildred’s message on three billboards in the middle of nowhere has landed him in Dante’s inferno and he has no idea why.

Sam Rockwell’s police officer Dixon knows perfectly well why, but his elephantine temper throws him into such a series of fits that his brain is paralyzed. These four persons make up the modern American nuclear family. The mother who knows right and the father who has (or thinks he has) better things to do. The well-meaning son is so implacably easy-going that he drives the hot-tempered son to apoplectic rage. In the background, an innocent girl is murdered and the system seems more intent on tracking down parking tickets.

Harrelson and McDormand we expect to be superb. Sam Rockwell and Caleb Landry Jones we are still trying to figure out. In this film, they have showed they have what it takes. Jones has parlayed his role of JB in Tom Cruise’ “American Made” to that of a leading supporting actor. The entire weight of the small-town America zeitgeist is on his shoulders in this movie and he comes through loud and clear. Rockwell reunites with McDonagh after their BAFTA nominated “Seven Psychopaths” and rockets that role into the stratosphere with his out-of-control cop Dixon. If there is ever a dull moment in his performance, his mother, (Sandy Martin), with whom he lives, takes up the slack and pours her own gasoline on his forest fire sociopathy. Fame and fortune are theirs to lose.

Carter Burwell’s soundtrack is flawlessly in sync with the soft, timeless melancholy of the story and setting. Burwell (also reuniting with McDonagh after “In Bruges”), also “Fargo’s” composer, shows a thrilling ability to tell a region’s story in its music.

Shot with no funny business, just as Mildred would like it, and garnering a BIFA nomination in the process, Ben Davis’ camera work is excellent. Close ups spotlight the souls and wide angles saturate the screen with lush natural beauty. Of course, the billboards themselves are stars. Their stark block lettering in their rigid rectangular frames against a backdrop of rich green grass gives immediate notice that something is not right, and it is going to get worse before it gets better.