Writer/director Richard Ayoade follows up his well-received “Submarine” with a gutsy adaptation of Dostoevsky’s redoubtable novel. Starring Jesse Eisenberg and Mia Wasikowska, “The Double” trots out a remarkable cast of famous actors, even more remarkable for their appearing in parts so diverse and bizarre that they may go unnoticed.

Jesse Eisenberg plays anonymous office worker, brick in the wall, and cog in the machine Simon. Simon works in a glassed-in cubicle reminiscent of the sort of hard-edged, half-private environs that represented a transition from a room full of bodies to the current fuzzier more personalized work spaces.

Simon’s boss, Mr. Papadopoulos, appears in the doorway of the cubicle like a giant pumpkin on Halloween. The carved features of his leering mug radiating bullying oppression like a police siren closing in on bums huddled around a campfire next to the railroad. Film viewers do not get many chances to see Wallace Shawn kick loose the way he does in this phantasmagoric depiction of modern society spiraling out of control. If you have an ounce of love for that great actor, see this film at all costs.

Simon pines for the girl in the copy room, Hannah (Wasikowska). Of course, he will never have her because he is too much of a wimp, too concerned about doing the right thing and too afraid of the ultimate fury of The Colonel (James Fox), who rules like the Wizard of Oz, behind many closed doors. Those who violate the rules are sent off to some sort of ill-defined brain-attitude recycling center where they are converted into either zombies or cat kibbles, depending on the degree of correction required.

After a few opening scenes, Simon’s double arrives at the office in the person of James. James is the polar opposite of Simon. He has every ounce of style and grace that Simon lacks and he has the courage to stand up to anybody at any time. Everything he does turns out to be successful, even when brazenly stripping Simon of what little success he might claim in the most menial of venues. 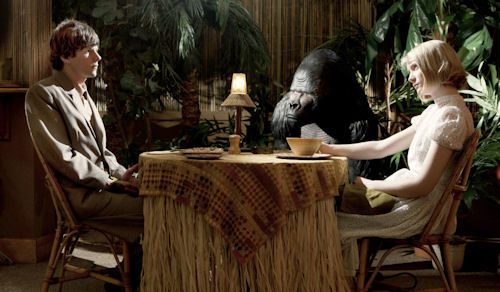 Simon gets no breaks; James gets breaks without even trying. James seems to have immediate and inherent access to the top levels of power and authority. He is on a first name basis with The Colonel and his inner circle, a group to which Simon is barely allowed to deliver coffee. Naturally, every woman in the office that Simon even thought of desiring falls immediately and totally for James.

The more that Simon knows about James, the more his personality seems to be eaten alive by the man. Confronted with what he could be, and what he is not, Simon slowly, irreversibly, seems to be giving up his personality to the other man. The viewer is drawn into Simon’s fight to preserve his own integrity and identity in the face of overwhelming odds. Although everything James does is wrong, he always seems to win. How long is one expected to fight against such outrageous fortune?

The staging and cinematic style of this flick is over the top, as it must be to convey as fantastic a story as Dostoevsky laid down on the printed page. Grand-Guignol gives way to Expressionist as camera angles and perspective become ever more bizarre and unimaginable. As reality gives way to insanity, the viewer is left with increasing diminishing undesirable alternatives.

Popping up at unexpected intervals like breakfast cereal commercials during a TV showing of “Carrie,” a wonderfully casted group of stars populates Simon’s increasingly irrational world. Yasmin Paige, Noah Taylor, James Fox, Cathy Moriarty, Chris O’Dowd, Sally Hawkins, Craig Roberts and Paddy Considine float in and out of Simon’s life, offering helpful advice and dire warnings about what will happen if he is not able to come to grips with his situation, which is an impossible situation to grasp from the beginning. 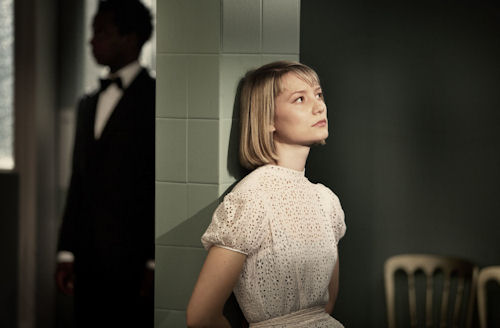