Jimi: All is By My Side: Trailer

If you would like to experience a resurrected Jimi Hendrix, it’s possible. The Seattle International Film Festival (SIFF) is presenting John Ridley’s “Jimi: All is By My Side” at its magical opening night gala on May 15, 2014. 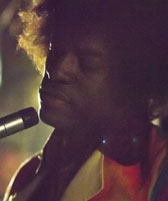 Ridley’s film is a shocking biopic starring André Benjamin – who becomes Hendrix. From the soft voice, skinny body, and constant gum chewing to the groundbreaking guitar work, Benjamin pegs the Hendrix we all loved.

Writer/Director Ridley, scriptwriter for “12 Years as a Slave,” captures Benjamin’s uncanny channeling in the months preceding Hendrix’s June 18, 1967, break-through performance at the Monterey Pop Festival when Hendrix set his guitar on fire, smashed it and became the world’s highest-paid performer of his time.

In the following trailer, Jimi is ensconced in an American diner with his new muse and mentor, Linda Keith (Imogen Poots), who was Keith Richards’ girlfriend. She has arranged a meeting with Chas Chandler (Andrew Buckley), past bass player for The Animals, who is now interested in managing a great performer.

The bottom line – go to the SIFF opening and see this insightful, revelatory, miraculous film.

Tags: "All Is By My Side", Andre Benjamin, Andrew Buckley, Imogen Poots, John Ridley
Posted 09 May 2014 by Bev Questad in Posters & Trailers