The Fault In Our Stars: New Trailer

Novels turned film, as anybody who knows me will tell you, are one of my biggest pet peeves. It’s not logically acceptable for time constraint purposes, setting purposes, and a varying degree of other factors to be taken into consideration. It’s a task that writers and directors take on and, in my opinion, is really unfair to judge their final product because the deck is stacked against them going into pre-production. 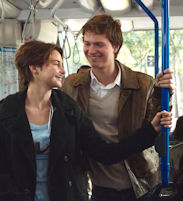 I have not read “The Fault in Our Stars,” so suffice it to say, I can solely base my analysis of the trailer on, just that, the trailer. I have nothing to which I can compare the plot or characters. Before even hitting play on the trailer, “The Fault In Our Stars” has a couple of things on its side, for instance, the film stars Shailene Woodley and Ansel Elgort, both hot off the teen presses with “Divergent.” It is no secret to whom this picture is aimed, and there is no shame in that.

Teen-focused films are in an awkward niche, they are a target for satire, an easy mark for jokes, but tend to rake in a lot of money because teens are the prime demographic for loosening their cash. I think this genre is relevant, purposeful and necessary. Does that mean I am going to enjoy the films that emerge from the facade? Not necessarily, but I can appreciate what they do for our young society. And for films such as “The Fault in Our Stars,” the benefits of the genre are apparent. Would teens be all abuzz about it were it not for “Divergent?” I can safely assume the answer to that. So will the film deliver? It’s on it’s way, battling a platitude of conflicting factors.

Hazel (Shailene Woodley) has cancer. In a cancer support group, she meets Gus (Ansel Elgort) and they fall in love. In a world where Hazel knows she cannot simply exist as a teenage girl who does teenage things — despite the urgings she receives from those around her, because of her terminal condition — love is not at the top of her to do list. Love creates collateral damage. Gus is determined, regardless of her hesitations. His wit and charm are apparent in the trailer and it’s easy to see how Hazel has a hard time pushing him away, which by the way may have nothing to do with the cancer, it may just be how teenage girls and eventually women guard themselves from pain and rejection. The story seems very sweet and emotional, and I think teen girls are going to eat it up.

Am I anxious for the film’s release in early June? Not especially. I don’t really have any negative feelings toward the film based on the trailer, I just don’t have any real excitement over it either. The most exciting part of the trailer for me was seeing some of the supporting cast, in particular Laura Dern and Willem Dafoe.

There seem to be a lot of cliched one-liners regarding love in the film, which is sappy and cute, but I need more. For instance, the one line in the trailer that people are commenting on is when Hazel says, “I fell in love with him the way you fall asleep, slowly and then all at once.” I don’t know why but this line really irks me because I feel it has been phrased and rephrased several times throughout cinema. I immediately thought of Christina Ricci in “Prozac Nation” describing bankruptcy and depression in a similar manner stating, “Gradually, then suddenly, that’s how depression hits.” Because that line invokes different emotions and memorable movies for me, it really becomes a throwaway line, but one I’m sure we will shortly be seeing all over teen fan sites, blogs and Twitter.

Kudos for the following the film is already receiving because those with positive reception are already receiving the film as being a good one. I will definitely see the film out of curiosity, and because I have not read the book. A wise person once said, “Don’t judge a book by it’s movie.” I will try not to — depending on my perception of this film.

“The Fault In Our Stars” will arrive in theaters June 6.