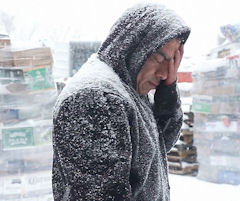 Most films at DOC NYC are shown once, but “The Fourth Kingdom” is scheduled for two screenings. Why?

In the first minutes of this documentary cinema verité, it looks like we are in for a story about garbage in Mexico and the people who take care of it. But as the film progresses more and more layers of truth and mystery are uncovered, with one of them being that the film actually takes place in New York City. But the reason the film is winning awards and catching attention is that it documents the three great crises of our time.

Material/Environmental Crisis
An old clip from a newsreel intones: “From these various raw materials chemists derive many different chemicals which when combined properly will form plastics. And because the molecules are different from the ones which the plastic’s chemist started, a new material is born. The future will bring plastic fabrics wondrously fine.”

As the report goes on, the camera pans a plastic refuse mountain, stacks of plastic receptacles, and bags of plastic bottles listlessly buffeted by a dry wind at Sure We Can, a nonprofit recycling outlet in Williamsburg, Brooklyn. Here plastic, glass, and cans are bought and sold.

Human Crisis
Like unwanted recycling, the men who organize the garbage are outcasts.

While American churches have sent missionaries around the world, it is a shock that this film is about a missionary who has come to the US. Ana Martinez de Luco is from Spain. Her position is to oversee Sure We Can for those needing kindness, a job, a community, and healing from abuses of all sorts.

The primary subject is René who has ruined his life with an addiction to alcohol. He has nowhere to go so he is given a metal crate to fashion into living quarters and a job to bag up plastic bottles. His goal is to stay sober and someday be rehabilitated enough to return to his family.

He studies a tell-tale poster on the wall: “We are like shipwrecked people trying to keep their balance on a miserable plank in the open sea … but once we fully accept this, life becomes easier. – Einstein.”

Spiritual Crisis
These men have all been to the bottom where they have lost their way. Rising up, little by little, they struggle for meaning, for signs, for some kind of hope. René looks through different kinds of glasses for a new reality. UFOs and the existence of God are discussed. A passion play ghosts in and out of the film like a chimera, with a mystic message.

Not so totally unlike the rest of us, the marginalized struggle for place, acceptance, nurturing, and meaning at Missionary Ana’s Sure We Can, where transformation is possible.

Àlex Lora Cercos, co-director with Adán Aliaga, writes about the title of the film: “That’s how we renamed the space, a magical setting, but also in reference to the kingdom of plastics, created by men, in addition to the three natural kingdoms: animal, plant and the mineral. The people of the ‘Fourth Kingdom’ transform trash into a source of income that allows them to live and integrate into society, to avoid being marginalized.”

“The Fourth Kingdom,” created by award-winning filmmakers Cercos and Aliaga, has so far won eight international awards, including Best Feature Documentary Award at the Atlanta Film Festival and the Van Gogh Award at the Amsterdam Film Festival. It premieres at DOC NYC on Nov. 9 and 13. 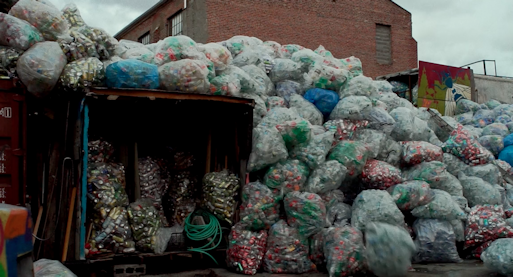