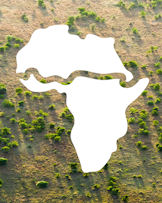 Inna Modja, a wildly popular Malian-French singer, takes a stunning journey across Africa, from Senegal on the Pacific to Djibouti on the Red Sea. As she travels, she and her band create music and collaborate with other singers and instrumentalists along the way. Her inspiration is The Great Green Wall.

A project to plant trees across the Sahara Desert may sound like impossible, preposterous idealism. But it turns out the project to build a swath of trees at the edge of the desert through an area known as the Sahel is real and ongoing. Modja checks on how far the project has come along.

In the Beginning
The plan, originating with Thomas Sankara and the Pan-African Agency, is to plant a forest through 20 countries, from Senegal to Djibouti in the Sahel, a thin transitional space between the hot Sahara Desert to the north and the milder Savanna to the south.

To save Africa from devastating climate change and increasing desertification, the Pan-African Agency was established to tackle environmental and climate issues. Since 2008 it has been encouraging a multi-national community project to plant a deep wall of trees. Thomas Sankara, former president of Burkina Faso, is said to be responsible for the first 10 million trees planted.

Each year communities nurture seedlings in tree nurseries. During the rainy season, from mid-August to September, they work fast to get as many trees planted as possible. Modja finds progress and some substantial tree groves, but another focus of Jared P. Scott’s film describes the link between climate factors and political instability.

Climate Affects Conflict
Scott, with Modja as his lead, links climate to the number one factor influencing conflicts across Africa. When farms fail there are no jobs, no money, and no food. Unemployment, poverty, and starvation fuel desperation and uprisings.

Modja explains the effects of The Great Drought of 1973 and The Great Famine of 1984. She draws links to terrorism, insurrection, and brutality with interviews of child victims of Boko Haram and a visit to an orphanage where the students line up to sing one of her songs of strength.

Modja, an African Beyoncé
Modja is quite frank that this journey along the route of The Great Green Wall with her musicians is to inspire her next album. This is definitely a romantic, sexy way to package a film about African perseverance, ingenuity, and survival as well as a clever commercial vehicle for Modja’s next venture.

Modja, a beautiful, talented African Beyoncé, is herself a symbol of suffering and success. She tells about her own life growing up in northern Mali and the harm that was done to her, catapulting her into becoming an activist and heroine.

“The Great Green Wall” is a gorgeous, terrifying tableau of the world’s most vulnerable people rising to their greatest battle – climate change. Its World Premiere is on Nov. 14 at DOC NYC. Director Jared P. Scott and executive producer Claude Grunitzky are expected to attend.