A couple of quick replies indicate they are being challenged to a computer dual. In fact, the troll is also able to control another computer in Nic’s and Jonah’s motel room, filling the screen with mysterious videos that further lure the duo into taking up the chase. Lucky for us they did, and also lucky they have the incredibly sophisticated equipment required to track an Internet signal.

Following the message to its source, the two end up at a deserted cabin in the middle of nowhere. The cabin contains some very sophisticated computer equipment that automatically tracks anybody responding to the initial taunting spam message. Nic and Jonah decide to go for the gold and out this troll who is broadcasting these insulting messages. The two are accompanied by Haley (Olivia Cooke) in her move to a new location, so she is involved as well. This is the most involvement that the viewer will see of Haley in the course of the film.

The “scanners” concept of someone taking over a supposedly autonomous computer is a good one. It lends itself to some sort of alien entity taking over the computer for nefarious purposes. This is the beginning of a good story. It is also the end of any good story that could have resulted from this film. What follows is a combination of terribly bad acting, a terribly bad screenplay and cinematography that is derivative, at best.

In the tradition of dozens (hundreds?) of horror flicks that have passed before, the trio trace the signal to a deserted cabin in the desert. Their discovery takes place in the middle of the night and their investigation of the cabin follows “Blair Witch” almost to the letter. There are nameless and meaningless abandoned furniture and white trashy interior ambiance that indicates whoever is in charge of this location is either a psycho or worse. Nonetheless, the trio continues with the grossly predictable result that they are entrapped, tortured, deformed, medicated, hypnotized, brain-eradicated and interrogated by Laurence Fishburne.

Names are dropped to the import that both Nic and Jonah are MIT students and therefore possess some sort of superior intelligence that allows them to see things that we mortals in the audience cannot see. As a result, they are able to talk through ductwork while nameless and faceless people run around dressed in the standard issue haz-mat suits. There must have been a record low costume budget for this flick.

Fishburne is safely ensconced in a haz-mat suit that allows him to make this film with minimal make-up, or acting. The most interesting question posed by this movie is why Fishburne ever agreed to take part in a film that never should have been made. Presumably there were favors traded. The two students are being used for an experiment, but they do not know the nature of the exercise.

What follows is the execution of a screenplay that is lacking in both originality and tension. The concept of the film as well as the sets and cinematography simply ask too much of the viewer. Energy and at least a little bit of a unique twist is supposed to make the difference. In this film there is no such saving grace.

The remainder of the film is complete with the meaningless truck chase, the ineffectual automatic weapon bullet firing and, eventually, the rebirth of Superman. An OK film for a rainy afternoon at the mall, see this one at your own risk. Remember to turn off your cell phones. 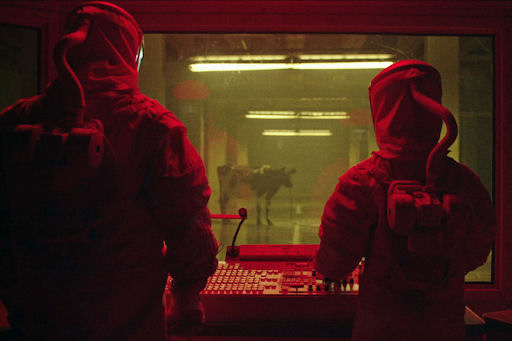