Some Italian films err on the lighthearted side, some on the heavy. Marco Bellocchio’s angst-fest “Dormant Beauty” is so laden with emotion soaked evocation the average American viewer may want a divorce after the first 15 minutes.

The story, written by the director, is loosely based on the real life tragedy of the comatose Eluana Eduardo. Her father wanted to remove life support after there was no longer significant hope she would wake up. In 2008, political conservatives joined forces with the Catholic church and, with the help of political animal Silvio Berlusconi, pushed a law through (or, to) Parliament to stop him.

The film consists of three fictitious stories showing different sides of this incendiary political issue, which caused a virtual civil war of words in Italy. Many critics consider the film to be a story of the life and death of the comatose girl, or a series of tabloid depictions of the news. The story is actually a study of life and death, in general, for all persons. The characters in the film cover a broad spectrum of understanding and acceptance with regard to the fact of life and death. Some appreciate the fact that the two phenomena are two sides of the same coin; one can never occur without the other. Others fear death and believe it is something to be fought with the last ounce of one’s strength. Still others love and appreciate life and do everything they can to preserve and improve the quality of life of the average, conscious person.

The latter are in the distinct minority in this film. The third story of the three pits the suicidal drug addict/prostitute Rosa (Maya Sans) against the stubborn, self-effacing Dr. Pallid (Pier Giorgio Bellocchio). This is the story of the glory of life, underscored in its rarity by placing it well in the background. This is the story of one common, ordinary person saving another common, ordinary person from despair and death. It is compared to, literally, all of the glitz and glamour Italy has to offer, apparently devoted to pandering to the basest sides of human nature.

The film opens with politician Senator Beffardi (in a riveting performance by Toni Servillo) stewing about an upcoming vote to forbid the father of long-comatose Rosa from disconnecting her life support. Beffardi’s friend and fellow pol plays the devil whispering in his ear, urging him to play on the side of the winners, those voting with the reactionary church position and the pandering political position of the politicos in power. 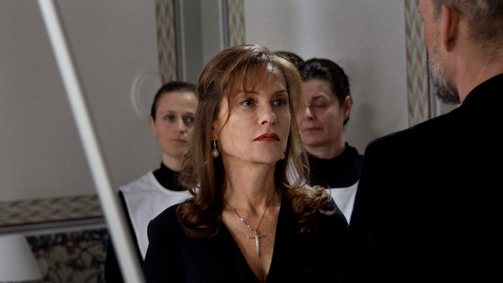 Upping the ante for Beffardi is his religiously fanatical daughter who openly despises him for even considering voting to stop life support for the girl. She considers herself solidly religious, even as she falls for a young man and, turning her cross to the other side of her neck, has passionate sex with him in a cheap hotel.

Next to be flayed by the Bellocchio story (helped out on the screenplay by Veronica Raimo and Stefano Rulli) comes the Isabelle Huppert character, known only as Divina Madre. She turns her house into a shrine and organizes marches through the halls in the style of Mussolini Nazis, exhorting God, Jesus, the walls, the plants, the shrine and the floorboards to move heaven and earth to preserve the life support for the girl. Her own life a travesty of narcissism and self-absorption, she transfers her sins to society at large and then launches an attack against them.

Meanwhile, in the funniest part of the film (and there are not many such parts), the Parliamentary shrink (played, amazingly, with a completely straight face by Roberto Herlitzka) gravely hears the pleas for help in the face of insanity by the members of Parliament. Pushed to consider the choice between voting to allow death and facing the end of their careers, or grabbing the chance to side with the church, they are having recurring attacks of wanting to cry. The suave doctor immediately prescribes a sedative and tells them to take the pills regularly until the emotion goes away.

The usual luscious Italian photography is deepened by some truly remarkable inspirations, such as the politicians lounging in the Parliamentary baths, from which their heads poke up above the steaming waters like the souls of Dante’s inferno, gazing blankly into a future that they cannot understand and which appears to have no end.

Even a little humor here and there, as one character describes a rabidly screaming character and having the emotion it takes to be an actor and explaining that it is alright for Catholics to be actors and that some are even good actors. In this film, there are many real life actors and better they act, the closer they come to joining the politicians in the pits of hell.

This film is hard to watch and requires constant concentration. There are a lot of jumps between the stories and irrational behavior that is hard to put together. See it if you are feeling short of anguished screaming, or if you are missing seeing Isabelle Huppert’s latest performance of the insane (not her best performance, however). Even the media gets speared once or twice, here and there. The only faction not skewered is the film industry. Maybe next time. 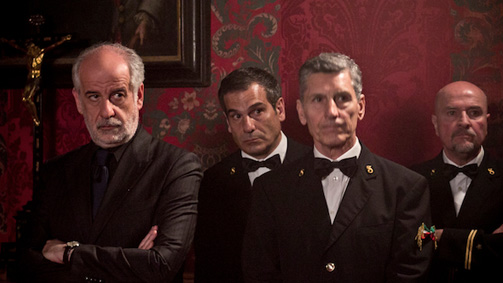