Three nine-year-old boys are backpacking in the idyllic Colorado Mountains with one boy’s dad and dog. The sun and blue sky envelop the quintet with seeming good fortune as they sing songs to distract themselves from the long hike to the lake. Suddenly, “sad clouds,” as described by unhappy Christian Davis (sensitively played by Connor Corum), balloon so ominously overhead that the dad, Mitch Davis (Michael Cassidy), abruptly announces it’s time to set up the tent. As night falls, lightning strikes first the tip of the tent and then breaks through in a fiery blast. 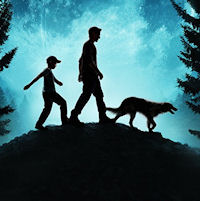 The script for this film, written by Mitch Davis, is based on his true-life story. While it begins with this startling crisis, it soon backtracks in time to show Mitch’s family in deep trouble. A stray dog shows up and, in innocent goodness, begins bringing some happiness to a family with an over-worked dad in the midst of Hollywood’s frenetic pace.

Davis has worked on iconic films like “Dead Poets Society,” “Newsies,” “White Fang,” and “The Rocketeer.” But on this film, he writes his guts out about his splintering family. As a director, he portrays the bare essential truth of his own life and the sacrifice and perseverance it takes to heal fractured relationships. Sarah Lancaster (“Chuck”) plays his beautiful wife with three children. She is natural and steady, yet also firm about her expectations.

A prescient moment occurs as the quintet drives up into the Colorado mountains that initially sunny, cloudless day. The dad prefaces one of his favorite music tapes, while Christian rolls his eyes, with the near-death story of Cat Stevens who had been caught in the ocean destined to die. He promised God that if He saved him he would work for Him. Suddenly a big wave comes up and pushes him onto the beach. Stevens left his music career to serve others. Mitch then plays Stevens’ “On the Road to Find Out,” which indeed they are.

A loyal dog is the guide, a journey into the mountains includes the challenges and a crisis provides the abyss of a classical structure that allows “The Stray” to touch an inner spirit, an inner knowing that this is the true story of all of us. Can we overcome our greatest test and come out transformed and greater? If so, what does that look like? What does it mean? What do we do?

Davis puts it all out there in this film about his family, his obstacles and his life-changing crisis. Jeff Johnson’s casting belies an extraordinary talent in picking the right people, including all the members of the Davis family and the two boys who joined the hike. 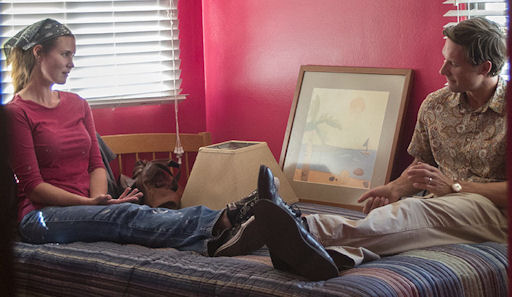 “The Stray” opens Oct. 6 and is a good family film for the weekend.