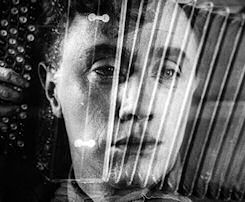 Even legendary Soviet actor Mikhail Zharov probably did not consider it a masterpiece. Like dozens, if not hundreds, of his films, it was watched by adoring thousands, if not millions, and then fell by the wayside. A curiously unfinished copy did more than fall by the wayside. It fell into the chill waters off Iceland and snuggled in the mud amidst the murmuring volcanic cracks and chasms that have formed the volcanic shelf over millions of years. Here the sea and sands of time would make its mark on Mr. Zharov before the village detective slouched and lurched back to life within the decaying corpse of a movie.

After seeing this hypnotic flick, the viewer will never again look at cinema as immutable. It has an age, a lifetime, a life and a death. This particular death was accompanied by rust stains and dilute byproducts of hydrogen sulfide, adding a whole new dimension to the celluloid.

The detective ponders the whereabouts of a disappeared accordion as the strangest music in the world plays in the background (thank you, David Lang). The music is either distorted accordion, funereal organ or synthesizers of unknown provenance. Sometimes the music emerges from the background to challenge the flickering screen for attention. They vie and bicker for the audience, neither one willing to concede that the other is the weirdest, the ghostliest or the most decomposed.

Following up on his 2016 “Dawson City: Frozen Time” exhumation of films remarkably preserved in the Yukon tundra, writer/director Bill Morrison brings his next feature to an amazingly creepy life on screen. Pictures flicker and waver and an indecipherable mixture of pigments, scarring, and simple destruction brings to life a zombie of a movie. This film was never meant to last, nor was it meant to die in peace. Its resurrection has come and along with it a well deserved last hurrah for Mikhail.

Along with the recovered footage, Zharov is featured in a half dozen cuts showing several of his more profound character roles. There is something so over-the-top about his Rasputin, his scheming court guard and his all-seeing cop that his vision begs to be eternal. It begs to be brought back from purgatory for a second run at the big time, even in leprous pieces. An arm falling off here, a leg there, a chair disappeared from under that substantial belly.

It is not surprising that director Morrison did his own film editing. In this movie, the physical film does not only transmit the message, it is the message. It is the medium that challenges us to say anything is permanent, challenges us to say even our memories are sacrosanct, safe from floods and fumaroles. There is no guarantee of a consistent message, no insurance against time and tide changing the meaning of what we said or what we remember.

By the time the accordion mystery is solved, in the best noir spirit of a frameup, we have moved beyond that story and on to the story of a man’s life and his death. Is he really gone as long as his films survive? Has nature edited this one to his benefit? 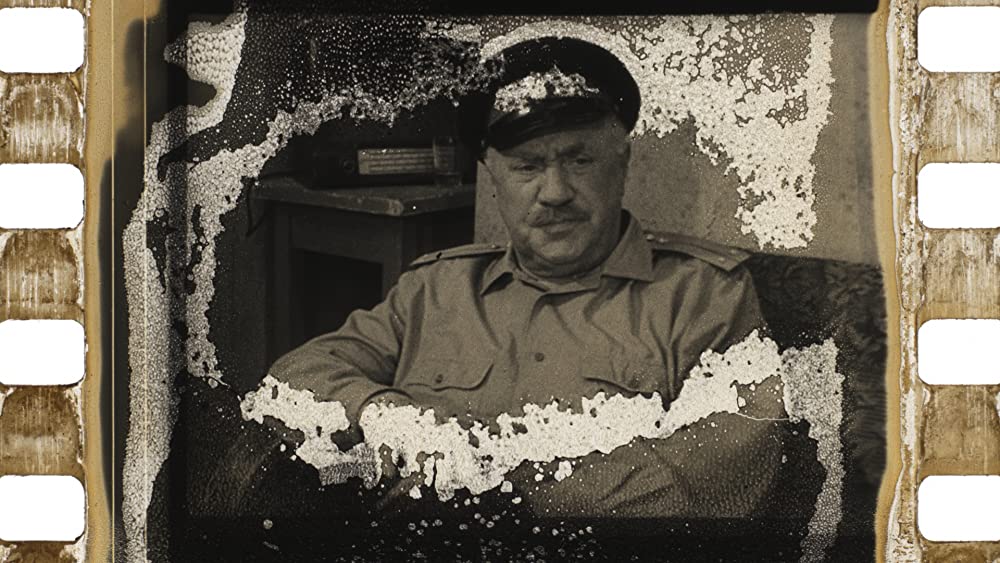