“The Wailing,” South Korean writer/director Hong-jin Na’s labyrinthine tale of possession, follows on the heels of his well-received “The Chaser” and “The Yellow Sea.” Incorporating elements of a number of western films, including the well-meaning police officer who will have a very bad day, the perky daughter who will play hostess to a very bad spirit and the stranger who is not what he seems, “Wailing” is a horror film that turns out to be something more. 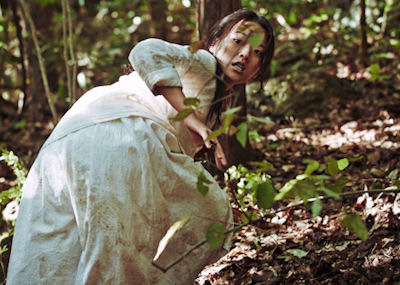 Kwak Do-Wan reunites with Hong-jin Na after the successful “Yellow Sea” and is fantastic as rural police officer Jong-Gu who, after years of self-indulgent complacency, finds himself ripped out of bed and thrown into a maelstrom of hideous murder.

As entertaining as the splatter shots are, the best part of this flick is the first half, where we get inside Jong-Gu’s soul. He dearly loves his daughter but is torn between his proud cop persona and his carnal desires. He knows something big is happening but only finds out what it is very slowly, at the same pace as we do.

The film opens with The Stranger (Kunimura Jun) threading a fish on a very messy fish hook. This is going to be a bloody flick. But it is more than that. The Stranger has come at a fortuitous time. As the shaman tells the hapless Jong-GU, the demon does not target any specific person, he simply passes through and sees who is ripe for capture. What we do not know is whether The Stranger is there as a life preserver for Jong-Gu or the high plains drifter conscience for the hapless souls of the doomed village.

Child actor Kim Hwan-hee almost steals the show as Jong-Gu’s precocious daughter Hyo-Jin. Creeping up on her father in the midst of his lusty reverie with the house maid in the back of the patrol car, she toys with his knowledge of what she knows, apparently far beyond her years. When he probes to find out how bad off he really is, Hyo-Jin throws away the line, “Well, it wasn’t the first time.” From that point forward we are never sure who is in charge.

Director of Photography Hong Kyung Pyo is back from his corker of a flick “Snowpiercer” and does some mesmerizing camera work. Much of the movie is shot in partial darkness and the treatment of the shadows is expertly managed to extract the most wonderful borderline between earth and the underworld. His work on the 15-minute-long aborted exorcism scene is vital to the superb performance of child actor Kim Hwan-hee.

Hong Kyung Pyo provides the raw material for editor Kim Sun-min to build the tension with a gradually escalating series of clues that lead from the damned to the predators and right back again. The editor reunites with the writer/director after his two previous hits “The Chaser” and “The Yellow Sea.”

The film has great supporting work by Hwang Jung-Min as swinging shaman Il Gwang (“This is one tough demon we have here”). Jang Young-gyu and Dalpalan pen a soundtrack that is suitably melodious and off-kilter at the same time, introducing the audience to the house of mirrors that is “The Wailing,” and keeping them there for the entire 160-minute run time.