Review: The Will to See

The film begins with a quiet pan of New York City and Central Park while a French voice-over intones, “This is where it all began. I am in New York City to defend the Kurdish cause and I receive a message from a stranger alerting me to the plight of Nigeria’s Christians.”

A compelling shot of carnage appears on the man’s cell phone. He cannot harden himself and advises, “Write, speak out, of course, but first go on the ground.”

Bernard-Henri Lévy (known as BHL), now a dashing 73, is a ground-breaking, controversial French writer, philosopher, activist, and war correspondent who has defied the newsperson’s observation-only mandate. Embedded with troops he rappels down rocky buttes, shoots a rifle, and gives inspirational speeches on anti-authoritarianism. He spurs on rebels and supports those who suffer. He gets involved.

In 2020, The Year of the Pandemic, Lévy began filming this documentary with Marc Roussel, a French photographer, director and journalist, and founder of two film production companies. It commemorates BHL’s life in war zones while also chronicling his assignments, beginning with the present – his harrowing trip to Darfur where he witnesses the ground strewn with massacred Christians. He spoke to the only woman in the village who was spared because she was pregnant. Instead, her fingers were cut off, then her hand, then her forearm, and then her elbow.

Scenes of butchery repeat over and over, beginning with his first foray into war corresponding in what is now Bangladesh. There, at age 23, heeding the call of Andre Malraux, he went to support and tell the story of the Bangladeshis struggle for independence. Returning 50 years later, he is appalled to note that poverty is even greater now.

Perpetually clad in a seemingly starched deep v-cut white shirt, black pants, black shoes, and black suit jacket, BHL is the James Bond of journalism. At one point, in the dirt and filth of an allegedly dangerous march with Kurds, he rappels down a rocky butte, an easy sniper shot. After landing at his destination, his black jacket lowered by a rope. There he stands, impeccable and heroic, freshly dressed for a martini at a Monte Carlo casino. He is neither shaken nor stirred.

Marc Roussel, BHL’s quiet collaborateur since 2001, co-directed this film of their work together in war zones, documenting through courageous footage, atrocities, grief, and even attacks against their own team.

Wealthy by inheritance, investments and writing, BHL is a romantic figure. While he narrates “The Will to See” he reminds us that despite man’s inhumanity to man, we still need to care. His take on his experiences and his refusal to become numb and indifferent, make this excellent documentary an inspiration for our time. 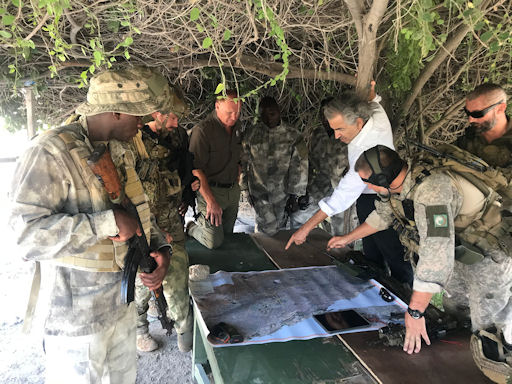