You are on European Airlines Flight 24, from Dubai to Paris, just flying into French airspace. It’s 7:24 a.m. and breakfast is being served in all classes. You ask for coffee. Then any flyer’s nightmare begins. The plane begins to descend, rapidly. This is what you experience via “point- of -view” in the opening scene of Black Box.

For any timid flyer, this is only the beginning. For me, a longtime but reluctant frequent flyer, this is all too familiar — in my mind the rugged French Alps reach up, and … Not to brag, but I can’t count how many times my will alone has kept the plane aloft.

Back to this excellent airline mystery from Studio Canal and others. I don’t know about other movie lovers, but when the Studio Canal designation comes on the screen, in so many different delightful forms, I know I’m in for a treat. This movie is no exception.

Writer/director Yann Gozlan (“Burn Out”) has created a taut mystery which develops slowly from a series of minor concerns to a murderous plot to shift the blame for a disaster. His development of this “What, How, Who and finally Why” is worthy of Conan Doyle, Christie, or Hitchcock.

Mathieu Vasseur (Pierre Niney) works for BEA, The Organization of Safety Investigation, a French air disaster investigation organization. He is blessed (or cursed) with exceptional hearing and discrimination. He can detect audio information that others cannot. This has alienated him from his co-workers, and has led to isolation within his department. His behavior indicate a very regimented, precise personality, without the bonhomie needed to succeed in team efforts. Despite that, or more correctly because of it, he resists the bureaucratic forces in his organization in order to follow his truth.

Somewhat surprisingly, he has an attractive, vivacious wife (Lou de Laage), who is in the process of leaving the BEA for a plum job with Atrian, the manufacturer of the crashed airliner.

When he is asked to lead the inquiry into the crash of Flight 24, he detects sounds on the degraded audio flight recorder that seem to indicate an onboard attack by a fanatical Muslim passenger. “Allah Akbar” can be heard on the highly enhanced recording.

That appears to settle the matter, but on further investigation, Mathieu realizes that there is much more going on, including his superiors at BEA, the manufacturer of the aircraft, a company responsible for aircraft security and even his own wife.

This is only the beginning of a labyrinthine story that deals with deception, betrayal, mistake, correction, discovery and death.

“Black Box” is a marvelous tale that cleverly guides the viewer first in one direction, then a second, and then a third. The fact that it indirectly reflects the recent scandal regarding Boeing’s 737 Max, at least for a while, makes it all the more topical.

Being a French film, from an American perspective, the performances are understated. That understatement serves the director well however, as it makes the denouement all the more startling.

Performances by Niney, de Laage and Olivier Rabourdin (“Fox Hunt”) as Victor Pollock, his mysterious superior, are excellent. They lack the exuberant personality of American characterizations, but are all the more realistic for that. Fine editing and a musical score that builds tension without being overwhelming add to this superior film. Truth will out, even if the teller doesn’t survive the tale.

Highly recommended, but not likely to be available as in-flight entertainment. 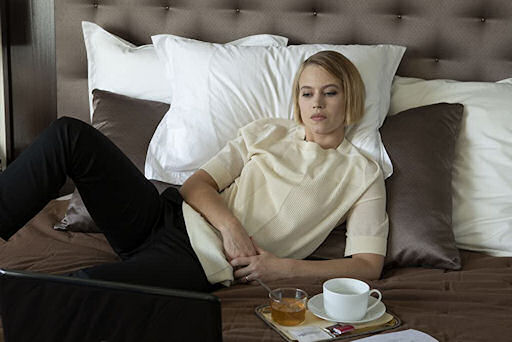