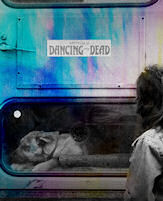 It’s 1985 and Lonnie Frazier is a very pretty high school girl. She goes out in a car with boys she’s known since grade school. Then something goes haywire. This one incident, though a hyper-example, is a core metaphor for the betrayal one can experience in formative years. We were expecting a much kinder encounter with humanity. Some, like Frazier, are hard hit and some consider suicide.

In Frazier’s case, she thinks it was literally attendance at a Grateful Dead concert that saved her life. She has made this film in gratitude and as a homage to the Dead community that has spanned the years before and after the death of its lead, Jerry Garcia.

Also helpful, of course, was her own resilience, departure from her tainted environment and traveling with two friends to the concert. But still, the impact of the Grateful Dead community, those people who followed the tour, attending multiple concerts and loving the improvisational music, remains a phenomenon. These peace-loving people, who became known as Deadheads, served as therapy for Frazier and generations before and after.

“Box of Rain” is not about The Grateful Dead as a band, but about the community found at their concerts. Young people yearning for acceptance and kindness coincidentally gravitated to Dead performances. Even now, the evolved band, Dead & Company, attracts the same people.

I watched this film with three adults over 40 who identify as Deadheads. They each found a kind of salvation in The Grateful Dead community when they were in high school and are still part of the greater audience. One plays in a tribute band, The Garcia Birthday Band, based in Portland, Oregon. They agreed that Deadheads, as those interviewed in the film remarked, are kind.

There is something different about a Dead concert compared to a Dylan, Beatles, or Stones performance. For the Dead, one of the main aspects of their music is that they never play a song the same way twice. They riff, they experiment and they create as they go. The audience feels they are participants, and their shared appreciation becomes a bonding encounter.

I asked my friends if this film accurately typified the Deadhead experience. Yes, they agreed that what Frazier documents – the kindness, acceptance and peaceful nature of the Grateful Dead community – is real. They said that going to a Dead concert is similar to a religious experience and a kind of therapy. Here you can be yourself and be accepted.

Throughout “Box of Rain” there is a sense that the Dead community is itself on a journey, working to make peace with life, learning from the other people in the crowd who acknowledge the pain of life. Together the experience of the transcending power and joy in Grateful Dead music unites them.

“Maybe you’re tired and broken
Your tongue is twisted with words half spoken and thoughts unclear
What do you want me to do
To do for you to see you through?
A box of rain will ease the pain
And love will see you through”
(Philip Lesh and Robert C. Christie Hunter. “Box of Rain.” 1970)

Tags: Lonnie Frazier
Posted 03 May 2022 by Bev Questad in Reviews