Review: The Wizard of Oz 3D

There has never been — and probably never will be — a film that can encapsulate such a feeling of awe and wonder, laughs and frights the way that “The Wizard of Oz” has done for the past 75 years. The film has become a rite of passage for the young, introducing them to movies in the best way possible. It is a classic that has withstood the test of time and only seems to become stronger and more appreciated as the decades roll by.

The story was originally written by Frank L. Baum in 1900, and these characters and this enchanting world have brought joy, laughter and entertainment to countless millions all over the world for three-quarters of a century. Everyone knows the story and the songs and everyone has a favorite character (I always loved the cowardly lion).

Having said all that, the question going in was whether a conversion to IMAX 3D was really worth it for this classic film and my answer is a resounding yes.

“The Wizard of Oz” takes us on a journey to a magical world along with Judy Garland’s Dorothy, her faithful dog Toto and her new friends — The Scarecrow (Ray Bolger), the Tin Man (Jack Haley) and the Cowardly Lion (Bert Lahr) — as they make their way to the Emerald City to meet the Wizard (Frank Morgan) in order to get their wishes granted. Along the way, they will have to avoid, and eventually battle, the Wicked Witch of the West (Margaret Hamilton) and face her minions of flying monkeys if they hope to succeed.

“The Wizard of Oz” getting released back into theaters is an opportunity for people of all ages to see the film on the big screen for the very first time. But you likely already know how great a movie it is. What you might want to know instead was whether it was worth the massive amount of time and money to re-master, edit and convert the film into a 3D format. There are four factors to consider: the use of 3D to enhance the movie, the clarity of the audio, the clarity of the images on the screen and the overall enjoyment of the film.

Unlike other films, the 3D conversion was very subtle. There were never in-your-face moments, but instead there is a depth added to the film. This completely helps in separating each element you are seeing, which helps to submerge you in the wonderful land of Oz, and make you feel like you’re part of the movie.

Instead of going the gimmicky route of sending the flying monkeys into the audience, the 3D feels natural and you immediately forget the film is in 3D as you become enamored with the lush details on the screen. This benefits the film greatly and makes every detail of the film feel more real.

The audio, which has been re-mastered using the original tapes, has never been clearer. I have seen “The Wizard of Oz” dozens upon dozens of times and I have sang and hummed along to every song growing up and familiarized myself with the very popular lyrics of each balled and anthem. However, I was shocked to hear things I had never heard before and realized I had learned a few words wrong to multiple songs. With the new added clarity, and the through the benefit of the IMAX surround sound audio, I was able to capture more minute words and sayings that I have never noticed before. I am a huge fan of music and it was almost like hearing “We’re Off to See the Wizard” and “Somewhere over the Rainbow” for the very first time. 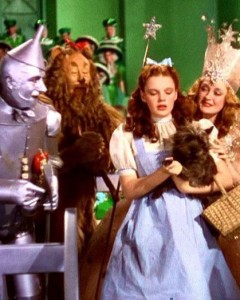 I am shocked at how clear the movie looked on the enormous IMAX screen. Having purchased the Blu-ray of “The Wizard of OZ” a few years ago, I have seen how much detail was uncovered from that scan, but this movie being re-mastered and cleaned-up for IMAX blows that Blu-ray out of the water. Thousands of man hours by hundreds of artists were spent on each and every frame to capture the purest form of the image and sharpen it to unbelievable lucidity.

With the addition of seeing it on the best screen possible, and it being four stories tall, I learned things about each character that I was never able to see before. Dorothy had freckles, the Scarecrows face was cross-hatched with makeup to simulate burlap material and much more. There were characters and details in the background that I was never able to catch in previous viewings. For instance, when the Scarecrow, Cowardly Lion and Tin Man head off to the Wicked Witch of the East’s castle to save Dorothy, the Scarecrow’s weapon of choice is a handgun? How had I never noticed that before?

Each performance is so enhanced that the charming factor is through the roof as you see Bert Lahr and the way he pranced as the Cowardly Lion and Ray Bolger as the Scarecrow bumbles around spilling his hay even when he’s not the prime focus of the shot. Jack Haley’s rigidity doesn’t stop him from showing true heart as he is one of the emotional centers of the film, and, of course, the amazing Judy Garland and Margaret Hamilton command the presence of the audience for every second they are onscreen.

There is a small downside to this newfound clearness, however. While it is amazing to think that every set, background and special effect was done practically and on camera –no computer enhanced effects — there is the slight impact of noticing that the scenes are matte paintings, or seeing the seams on the bald caps the majority of the munchkins are wearing. Being a film lover, I marvel at the inventiveness and ingenuity used to create new worlds before there was the technology to do so in the computer. These tiny details could be slightly jarring for certain viewers, but can be easily overlooked when you become enraptured in the movie.

“The Wizard of Oz” is rated PG for scary moments. Click HERE to find the IMAX screens in your area and hurry as this is a very limited engagement that will only last for one week.

I highly suggest that you take your family, children, friends and anyone else down to your local IMAX screen and experience a rare opportunity to see “The Wizard of Oz” on the big screen. The movie also will be released on special edition Blu-Ray and 3D Blu-Ray on Oct. 1

, but it is worth checking out in theaters as well as adding it to your movie collection at home.

In the meantime, you can watch a featurette on the Restoration & 3D Conversion for the IMAX screen below: