Review: The World Before Her 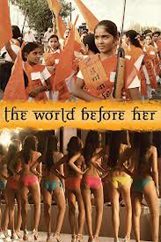 “A lot of people think if you allow women to be liberated and get educated, you lose your culture,” says a Miss India contestant. The follow-up questions should be about what constitutes a culture and how the oppression of one group of people is ultimately beneficial to the whole.

This eye-opening documentary tracks two extreme opposing and culturally confusing paths to female independence in India today that reflect women’s issues throughout the emerging world nations. How these paths affect their culture may not be as significant as the fact that both options are allowed to operate in a misogynist culture that looks upon females as a familial liability. But in a time of booming advances in the work sector, the times they are a-changin’.

“The World Before Her” juxtaposes the story of Ruhi, a contestant in the Miss India extravaganza, and Prachi, a trainer in a militant summer camp for young girls. The beauty contestant hopes to raise a family and make her father proud. The trainer hopes to have a career and never marry, saying she has no desire — despite her father’s warning that she has no choice. Both demand the right to determine for themselves what they will do with their lives.

They represent India’s extremes in the drive to recognize women’s worth. In a country where 750,000 girls are deliberately aborted every year, thanks to ultra-sounds, in preference to sons, the challenge for gender equity is fraught with cultural blockades.
While the beauty contest has girls strutting on stage in bikinis with full-lid-to-eyebrow eye shadow, an affront to sub-continent values of modesty, the radical camp trains young girls how and why to fight against Christians and Muslims, not exactly the dream idea for the mainstream anywhere.

For 30 days, the camera follows the Miss India hopefuls in group “training” where they get botox injections, painful skin whitening sessions (with a product named Made in the USA), and heavy make-up applications. At one point, they are at a beach photoshoot where they strut on a catwalk like skinny ghosts, heads draped with white sheets so that only their bare legs are admired. Protests erupt in the streets over the immodesty and westernization of the pageant.

One contestant says she still celebrates her culture because she still speaks Hindi. However, she asserts women need to be given a choice on what they wear, what they do and what they want to become. She claims things are beginning to change and some parents are willing to give women more independence.

On the other side of the spectrum, at a camp run by Durga Vahini, the women’s militant wing of the largest Hindu nationalist group, the focus is on spiritual and physical training. Prachi, the tough boot camp trainer, began as a participant at this camp when she was three. Now, she’s 24. When asked if she would kill for the Hindu religion, she responds, “Yes. Whoever goes against my religion. It is self-defense. I am not a Gandhi supporter. I hate Gandhi.”

However, her self-assured rhetoric is stymied at home where her father, who once burned her leg with a hot iron for lying in 7th grade about her homework, says, “I don’t know what she wants or doesn’t want and it’s not important.”

A series of questions about feminism, gender equity, sexual orientation, human rights and extremism coils beneath the surface of this doc. But along the way, we gain a little glimpse into two lives of women who are stepping out of cloistered expectations to follow their dreams, however inappropriate, radical, dangerous or even antithetical to their cause they may be.

This well-crafted, fast-paced, interesting doc with startling footage of life behind the Miss India pageant and the Durga Vahini training camps will be featured at the Portland Art Museum’s Northwest Film Center on Oct. 31 for a one-day-only screening.