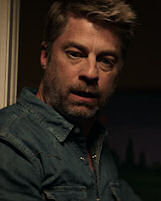 His parents engaged in an ugly divorce, Ben does the wrong thing and breaks into a neighbor’s house to steal some opioids. A bad thing, but not bad enough to merit the bloody coming out of the ear treatment by a decidedly evil witch-like monster. At the same time, the marvelously snotty rich kid who lords it over Ben at the marina, gets nothing. Is there no justice? No guilt means no plot, and this flick fails out of the gate to make the grade.

Good production and a well done flesh eating demon move things along in spite of lukewarm performances by a young cast. No matter, they will get better in time, as will the skills of directors/writers Brett Pierce and Drew T. Pierce.

A horror movie has to have a touch of the insane, an opening hook that makes the viewer want somebody to be punished. Victim one in this story comes close to that, apparently killing a deer for sport. This comes oh so close to being a hook but fails in the crucial first minutes of the movie. She needed to be lamer, more gloating, more prideful. Or perhaps she just poached the deer out of season (summer is not hunting season) and being a clumsy hunter, caused it undo suffering. Anything to make her “deserve” her bleeding ear, jugular munching fate. This needs to be hammered home from the outset, and it was not.

Troubled teen Ben (John-Paul Howard) bonds with his otherwise estranged dad Liam (Jamison Jones) in what would otherwise be a nice side-story. In this movie it detracts from the clawing creature talking to innocent children from disappearing holes under trees. Better to forget the father-son reconciliation and concentrate on middle-aged dad’s canoodling with sexy Sara (a potentially seething Azie Tesfai), a woman who should have been after his money, or something. Anything, for her to have deserved the old alien breast implant.

BTW, the “Alien” creature from the chest rip-off is lame. It was good at the time but has not been good since. It is also shown coming out of the deer, which is better, especially in light of the Covid-19 virus originally harbored in animals. No need to confuse the issue. Better that the ditzy suburban housewife tortures the deer and the monster emerges to take revenge by making blood come out of her head. Is that so hard?

The zombie demon transfer is weak, just used too many times. Nice shots of an old fisherman, who could have played a major part in all this. Was he really human vector one? Alternate plot – monster mutated from old atomic waste secretly stored beneath what is now a tourist resort by greedy corporate fat-cats, the only remaining one of which is now a secretive old man who enjoys cerebral hemorrhages. Just thinking.

On the bright side, a thoroughly accessible film for mature teens. Zero lame sex and only a little lame alcohol consumption, nothing shocking. Better things to come for this cast and crew.