Screened at the 39th Seattle International Film Festival, Taiwanese director Chao-jen Hsu’s quirky rom-com Together is a fun look at Taiwan’s Gen Y young adults. Mobile, connected and ready to rip, these kids are like army ants on the move. Carrying their communications on their backs, and their motor bikes, they are as unsure of their destination as they are sure they need to go.

For those who saw the engaging French dramady “Amelie” a decade ago, the pixie like Audrey Tautou was a breath of fresh air. She not only personified the perpetually young side of love, the side that cannot be defeated, but she seemed to be the Einstein of doing the right thing. Everything she did seemed to work out. It some cases it took a while, but in most cases the happy ending came quicker than micro-waved Smuckers over ice cream.

In “Together,” 17-year-old high-schooler Xiao Yang (Shao-Yang Huang) finds himself in the midst of a world with too many cares and too little love. Whether its pork noodles in a time of need or just a little bit of friendly bullying to get a pal to say hi to Ms. Right, Yang always seems to be the right place at the right time. The film takes the viewer into the side streets and hidden alleyways of the big city. It is noisy, dirty, smelly and crowded. There is no privacy and it seems that everybody acts out all the time. Maybe the reason is that there is no time like present to have a fight or a temper tantrum and no place private to have it, anyway. So one may as well do it here, now and in front of God and everybody.

It this way, set in those intimate and shabby quarters, we see on the screen what Yang sees through his emotional ESP. He is the most marvelous combination of the Darling children in Peter Pan and Tinker Bell. Except that he is as street hip as they come and he slings a smart phone faster than Tinker Bell could dash a handful of pixie dust. He is the very epitome of the inner city dude who could be very bad if wanted. Instead, he has chosen, well, to make people happy.

In the end, after starting, end and repairing more relationships than Abigail Van Buren, he sees that he, too, is in need of a change. As if his work is done and it is now time for him to return to another life, or leave earth entirely, he is gone with the soft rasp of a Chinese scooter, a wisp of oil smoke and one last glimpse of his child’s book bag. Who was that stranger? 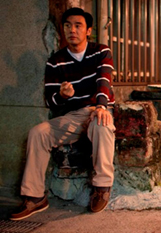 It is hard to compare either the lead characters of “Together” and “Amelie” and even harder to compare Shao-Yang Huang to Tautou, but Chao-jen Hsu’s vastly more street-savvy update is much more entertaining to watch. It combines the bright and eternal payback of childish optimism with the fly-on-the-wall perspective that every tourist wants of Asian neighborhoods no tourist would dare to enter. The result is an amazingly real look at Asian youth, their parent and grand[parents and the pain that ultimately brings them together.

Simplistic solutions? You bet. Then again, sometimes the simplest solutions are not only the best, but the easiest overlooked. Is your sister having an affair with the nastiest man on earth, who treats you, and her, like dirt and humiliates you in public? Be nice to him. Unbelievable? Although being nice to him is neither here nor there, the important thing is to there for your sister when he is gone from the scene, which will not be long in coming.

Xiao’s father has virtually deserted his wife, taking refuge in his print shop instead of spending time with the woman he is supposed to love. His friends, too, are having trouble coming to grips with their emotions. This is expressed often as hostility for one another, when, just given time and understanding, the truth of their friendship comes to the surface.

Like “Amelie” this film is a subtle combination of comedy and drama. The costume salesman next door to Xiao’s mom’s juice stand seems to be flirting with her. His Mom, acting distressed and hardly ever smiling, is a beautiful woman who is wasting her life away pretending to still Xiao’s father. What to do? Xiao will figure out something.

In the end, it all works out, as the screenplay bounces from scene to scene with no more of a plot than wildflowers following the day’s sun or lovers enjoying the company of one another. The intent of Chao-jen was to tell a sad story in a happy way, exploring what seems to be the breakdown of traditional romantic relationships in the context of the big city, with its noise, crowds, cell phone and media bombardment. His free-form and improvisational directing was the key to success for this film.