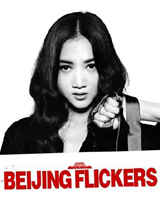 Happiness, a big loping dog, runs through Beijing streets chased by his owner, San Bao (Duan Bowen), on his motorbike. An ill-timed stop manned by a traffic cop restricts Bao from following free-running Happiness, so Bao hauls off and decks him.

Like a row of dominoes clicking back against each other, our protagonist’s life tumbles apart one incident at a time. Dog, girlfriend, job and place to live all evaporate under his once-steady feet. Like a spreading plague, everyone he encounters also proceeds to lose what they value.

This is an amazingly reflective Chinese film, examining various permutations of rejection and personal despair in the big impersonal city. It is narrated by Bao in diary form as he sees he is not alone. “There are many desperate people as there are many roads. And this city has only fallen into deeper sin amongst repeated indifferences.”

Of course, the most extreme reaction to rejection and despair is suicide, and our protagonist tries that route in a series of outlandish maneuvers, including eating a glass. This first ridiculous misadventure ends him up in the hospital with a lacerated mouth and begins his medically inspired silent journey of 127 days. The film begins with the end of this journey where his first word is “Me.” But it is not until the end that we get the transformative context that prompted this utterance and allowed him to regain what he had lost, his true happiness.

Early on, Bao announces, “I was once quite talkative. Maybe after losing too much in life I also lost the courage and ability to speak.”

Zhang Yuan, producer, director, co-writer, and cinematography expert, symbolically depicts that coming-of-age time in a young adult’s life when the reality of life and its challenges comes crashing in. You either adapt or allow it to overtake you.

What impressed me most about this film was the delicately beautiful female cast, the kinds of rejection and disregard they faced, and how they each reacted. Unlike American films that are predominantly cast with men and deal with fantasy/adventure themes, this work of art plumbs the depth of the whole human condition, ambitiously engaging class and gender.

The fresh script includes poetry, music, and insight. At one point the beautiful You Zi (Li Xinyun), playing a captivating singer, croons, “I am victim to the Stockholm Syndrome,” implying that she is caught up in a situation where she has sympathy, perhaps even obsession or love, for the very forces causing her despair.

Another gifted performance is by Bao’s androgynous hospital roommate, Xiao Shi (Shi Shi), who performs provocative dances in drag, but is reviled outside the walls of his stage life.

Shang Yuan, the filmmaker, is representative of what has been termed China’s Sixth Generation of filmmakers, surfacing right after the massacre at Tiananmen Square demonstrations in a rebellious, critical response to increased government censorship and repression.

“Beijing Flickers” is part of the Global Lens Initiative, which annually grants funds to 10 filmmakers to develop independent work reflective of the social/political environment in which they live.