Review: We Are Many 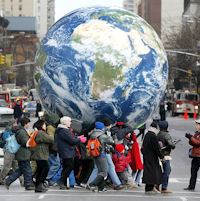 One Night For Peace is set for Sept. 21, 2020. It’s the UN International Day for Peace and a commemoration of the largest peace march in the history of the world.

Beginning at sunrise on Feb. 15, 2003 in New Zealand, the world’s largest protest began and followed the rising of the sun: Australia, Japan, Bangladesh, India, across Russia, down into Africa, Antarctica, Cairo, Rome, Madrid, London, New York City and more cities across the US. “We Are Many” reports that 800 cities and 30 million people from around the world protested against invading Iraq.

I was one of them as were many of you. We hoped me our representatives would cock an ear to their constituents and vote as the people demanded.

I remembered all the Vietnam protests when business as usual hummed along in our nation’s capital. As a matter of fact, the tricky guy winning an election promising to bring our troops home did nothing but expand and accelerate US killings and American casualties. Do protest marches work?

“We Are Many” documents the formation of the 2003 global march against the US/UK invasion of Iraq and the sordid political deceit that led up to the arrogant disregard for citizen voice. Hans Blix, head of the UN Weapons Inspection Team, still maintains that there was no evidence of weapons of mass destruction in Iraq. Something else was afoot.

The US had convinced Colin Powell of alternate, false evidence and the game was on. The bombings began a “shock and awe” tactic that decimated the Iraqi infrastructure and murdered thousands of its citizens.

Noam Chomsky: “The excessive radiation in Falluja was worse than Hiroshima.”

Stephen Hawking: “The invasion was based on two lies, that Iraq had weapons of mass destruction and that Iraq was responsible for 9/11. Now 100,000 have been killed as result of the invasion. If that isn’t a war crime, what is?”

I knew the film would end on a hopeless, despairing note. No matter what we ever did, no matter how massively we ever protested and peacefully demonstrated for peace, the people would be ignored. Shockingly, George Bush was re-elected, after rattling the middle east so hard a more deadly and more pervasive enemy, ISIS, was created. Peace protestors despaired.

But that is NOT how this film ends. No, it is not. In the next wave of elections the old guard was replaced. Obama, stridently running as a guy who had been against invading Iraq, was carried into office. The British Parliament transformed. And something more transformative and cataclysmic happened in Egypt – all related to the 2003 protest.

“We Are Many” examines the 2003 march, the invasion into Iraq and the aftermath in virtual theaters beginning Sept. 25.

However, the filmmakers are asking us to join them in a virtual One Night for Peace on Sept. 21, featuring music, a screening of the film, and a Q&A session with the film’s director, Amir Amirani, and renowned activists. Tickets can be purchased here: https://watch.eventive.org/wearemany/